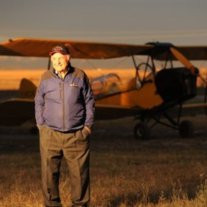 Allister Gordon Jones – known as “Gordon” to all – died peacefully on September 10, 2013 after a brief stay at the Foothills Country Hospice in Okotoks, Alberta. Gordon was 90 years old. Gordon was born on January 12, 1923 on a farm outside of Bangor, Saskatchewan, a Welsh community established in 1902. The second oldest of ten children born to Daniel and Lydia Jones, Gordon worked hard on the family farm throughout the depression, and continued to help his family as much as he could when the family moved to Saskatoon in the mid-1930s. In 1941, soon after turning 18, Gordon visited a Royal Canadian Air Force recruiting office. This proved to be a defining moment in his life. Although it took three or four times to pass the medical, Gordon was accepted and soon was deemed the ‘desirable type of material’ for a Canadian fighter pilot. During basic training, he met his beloved wife of almost 69 years, Linora Frances Randle. The two were married on October 26, 1944 in High River, Alberta. After the war, they established a farm east of High River and together raise five children: George, Barbara, David, Mary-Ellen and Darcy. During the war and throughout his life, Gordon imparted his knowledge and passion for flying to many. Under the British Commonwealth Air Training Plan, he was responsible for training Commonwealth airmen. Gordon and Linora farmed and ranched together for 40 plus years in the High River area. Gordon was very involved in his community with Rotary, Curling, Golf, Alberta Flying Farmers as well as the MD of Foothills. Gordon served for 15 years with the MD as Reeve, Deputy Reeve and Councilor. If desired memorial donations may be made to the Foothills Country Hospice www.countryhospice.org or the Nanton Bomber Command Museum www.bombercommandmuseum.ca. A Celebration of Gordon’s Life was held on Friday, September 20th at 1:00 p.m. at the Nanton Bomber Command Museum in Nanton, Alberta. To send condolences and view Gordon’s Tribute page please visit www.lylereeves.com . Caring for the family is Lyle Reeves Funerals (Craig Snodgrass) of High River 403.652.4242.

The family of Mr. A. Gordon Jones created this Life Tributes page to make it easy to share your memories.

Allister Gordon Jones – known as “Gordon” to all – died peacefully...