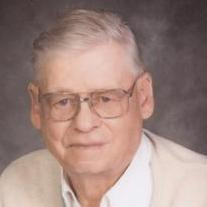 It is with sadness in our hearts we announce that Alex Emile Lacaille passed away on Nov. 2nd, 2011 at the High River Hospital, with his family by his side. Alex is survived by his loving wife of 59 years, Tillie; his daughter, Diane (Robert) Delanoy; and grandchildren; Kelly (Nadia) Delanoy, Chris Delanoy and Lisa (Scott) Woodruff. He is also survived by his sister, Irene Bourassa and brothers; Harvey (Dorothy) and Omer Lacaille, sister-in-laws; Mary Heinzman, Bernie Verot and brother-in-law; Mike (Gayle) Lanz, as well as many cherished nieces and nephews. He is predeceased by his father and mother; Henry and Audelie (Fradette) Lacaille, his father and mother-in-law; Mike and Margaret (Schaefer) Lanz, as well as many sister and brother-in-laws. Alex was born March 18, 1926 at Ogema, Sk. In 1931 he and his family moved to Radville, Sk. where they began farming in the Soda Lake district . Alex began helping on the farm at a very young age. By the time he reached his early 20’s, he and his brother, Harvey, ran the farming operation together on their own. Being raised during the dirty 30’s, made him very resourceful. There was a use for everything and success in doing everything well. Alex married his beautiful, young bride, Tillie, on June 18th, 1952. They were blessed with a daughter, Diane, who was born in 1953. In 1974 Alex and Tillie moved into town and in 1986 Alex fulfilled a lifelong dream to live in the beautiful mountains of B.C. In Kelowna he continued farming on a smaller scale, as a hobby gardener. Alex was never very fond of snow and in the late 1970’s, he and Tillie began spending their winters in Mesa, Arizona. They were able to do so for over 35 years and only last winter did he have to experience snow one last time. Alex belonged to the ‘pool league’ in Good Life park and he enjoyed many hours with his buddies. Playing a good game of cards, or happy hours on the patios brought him pleasure, but his greatest pleasure in life came from watching his beautiful grandchildren grow. He was so proud of each one of them and he took great delight in hearing what new accomplishments or adventures they had to share with him. In 2002 Alex and Tillie made their last move to High River, AB. to be close to the family and it was here that Alex spent his last days. ‘You fought a brave fight, your battle is done’. Rest in peace. A Prayer Service was held on Monday, November 7th at 7:00 p.m. at St. Francis de Sales Catholic Church in High River. Funeral Mass was celebrated on Tuesday, November 8th at 11:00 a.m. at St. Francis de Sales Catholic Church in High River. In lieu of flowers memorial donations may be made to High River Hospital Foundation (Palliative Care Unit) 560 9th Ave. SW, High River, Alberta, T1V 1B3.

It is with sadness in our hearts we announce that Alex Emile Lacaille passed away on Nov. 2nd, 2011 at the High River Hospital, with his family by his side. Alex is survived by his loving wife of 59 years, Tillie; his daughter, Diane (Robert)... View Obituary & Service Information

The family of Mr. Alex E. Lacaille created this Life Tributes page to make it easy to share your memories.

It is with sadness in our hearts we announce that Alex Emile...