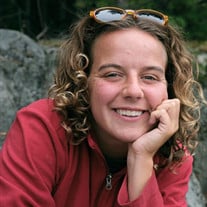 Alexandra Charlotte Hay, cherished daughter of Mary-Ellen Wilderman-Hay and Bradley Hay of Vancouver, passed away in Toronto at the age of 26. Older sister to Emily Hay (Ricardo Rodriguez) of Vancouver and loved by her partner Christopher Nixon of Toronto. Alexandra had a smile and a twinkle in her eye that you were undeniably drawn to as she entered a room. Her heart was always full of love, and she gave hugs like no other. The bounce in her step, the curls in her hair, and her meaningful “Hello” always made one want to get to know Alexandra. While Calgary was Alexandra’s childhood home, in 2008 along with her family, moved to Oklahoma City, OK and then on to Tucson, AZ where she graduated from High School in 2013. After graduation, Alexandra came back to Calgary where she attended the University of Calgary for 2 years. Relocating was in Alexandra’s blood and in 2015 she moved to the city that she truly called home, Toronto. It was there that Alexandra fell in love with the lakes and cottage country. Her passion for the outdoors had emerged with endless camping and portaging trips. Alexandra was currently attending George Brown College in the Social Service Worker program where upon graduation was planning on working with Women of Addiction and Trauma. Alexandra never lost her love of dance but 3 knee surgeries later, she focused on yoga and rock climbing. During her childhood years in Calgary, she danced with Elite Dance Academy and The Young Canadians of the Calgary Stampede. While back in Calgary for University, she danced with the University of Calgary and The Surge Dance Company. Oklahoma found her with Dance Unlimited and on stage with Musical Theatre Productions thru Lyric Theatre and Sooner Theatre while in Arizona being a part of Dance Force 1. Alexandra will be missed by her Grandmother Heather Wilderman of Victoria and her Grandma Barbara Hay of Lacombe. She was predeceased by her Papa Walter H. Wilderman and Grandpa Donald W. Hay. Also saddened by her loss are her aunts, uncles, cousins, and her extended Toronto family. Alexandra’s NA Recovery Family will always hold a special place in all our hearts. A Celebration of Alexandra’s Life will be held on Friday, April 8th at the River Café, 25 Prince’s Island Park SW, Calgary, Alberta at 12:30 p.m. For those unable to attend a Livestream of the service will be available on Alexandra's Tribute Page at www.lylereeves.com . In memory of Alexandra Hay, donations can be made to Nellie’s in Toronto, Ont. Shelter, Education, and Advocacy for all women and children. Caring for the family is Lyle Reeves Funerals of High River (Craig Snodgrass) 403.652.4242.

Alexandra Charlotte Hay, cherished daughter of Mary-Ellen Wilderman-Hay and Bradley Hay of Vancouver, passed away in Toronto at the age of 26. Older sister to Emily Hay (Ricardo Rodriguez) of Vancouver and loved by her partner Christopher Nixon... View Obituary & Service Information

The family of Ms. Alexandra Charlotte Hay created this Life Tributes page to make it easy to share your memories.