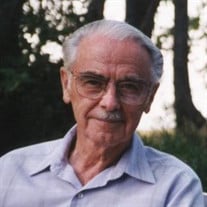 It is with great sadness that the Dixon family announces the passing of our father, Allen Dixon, at the age of 94 years in High River, Alberta, after a brief respiratory infection. Allen is survived by his sister Pauline Hicks of Two Harbors, MN, his daughter Donnalee (Scott) Culver of Sequim, WA, sons Duncan (Debbie) of Langley, BC, Everett (Solange) of Duncan, BC, and daughter Laurie (Jack) Knight of High River, AB, as well as 15 grandchildren and 12 great-grandchildren. He was pre-deceased by his wife Margaret in July, 2017 and his sister Jean Brower. Dad was born in Hughenden, AB to Frank and Janet Dixon. He graduated from high school in Wainwright and entered the University of Alberta in Edmonton where he completed a B.Sc. in 1946 and MD in 1949. During his student days, he was an active participant in InterVarsity Christian Fellowship, playing in a trumpet trio, and singing in a quartet. It was through InterVarsity that he met and fell in love with a nursing instructor named Margaret Rooney. They were married in 1950 and immediately moved to Vancouver where Dad took a position as a resident in surgery at Shaughnessy Hospital. The family moved to Mission City in 1951, where he practiced as a GP for 8 years, followed by a return to Shaughnessy for another year of surgical residency in 1959, before moving to Enderby in 1960. They lived in Enderby until Dad retired in 1986, at which time they moved to Kelowna. Dad was always busy, whether doing rounds and surgery at the hospital, or seeing patients in his office. He lived out his Christian faith in his public and private life. His involvement at church included teaching Sunday School, singing solos and in quartets and choirs, as well as involvement on the church board. He also served a term as an alderman for the City of Enderby. He loved to travel and summers found us heading off with our Shasta trailer to adventures on the BC coast, Washington, Oregon, or the Rockies and Alberta. He rarely sat still for long and enjoyed curling, tubing, skiing, fishing, and golf in his spare time. Although he lived a busy life, he always had time for his family and made time together a priority. As Dad approached retirement, he and Mom began to look for areas of ministry outside of Canada, which included periods of service at Salvation Army Hospitals in Zambia (1982) and Zimbabwe (1987) where he provided relief for missionary doctors. He and Mom also made 7 short-term mission trips to Hospital Vozandes-Shell in Ecuador, run by HCJB Global (now Reach Beyond). Dad had a very active retirement visiting family in the United States, Brazil, Japan, and many parts of Canada. Memorial service details will be announced at a later date. To send condolences and view Allen’s Tribute Page please visit www.lylereeves.com. Caring for the family is Lyle Reeves Funerals of High River (Craig Snodgrass) 403.652.4242.

It is with great sadness that the Dixon family announces the passing of our father, Allen Dixon, at the age of 94 years in High River, Alberta, after a brief respiratory infection. Allen is survived by his sister Pauline Hicks of Two Harbors,... View Obituary & Service Information

The family of Dr. Allen Easter Dixon created this Life Tributes page to make it easy to share your memories.

It is with great sadness that the Dixon family announces the...