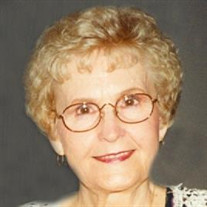 Mrs. Alma Merkel of High River, Alberta passed away on June 11, 2015 at the age of 85 years, in Okotoks, Alberta at the Tudor Manor, where she had resided since 2013. Alma is survived by her children Warren (Michelle) Merkel of Abbotsford, B.C., Brenda (Hans) Abild of High River, Ross (Gaylene) Merkel of High River, Debbie Walde of High River, Darrin (Lydia) Merkel of Calgary, Kevin (Sandy) Merkel of Langley, B.C.; 23 grandchildren; 19 great-grandchildren; siblings Esther (Dave) Gilson, Mel (Mary) Loose and Bob (Lucille) Loose; sister-in-law Gudren Merkel as well as numerous nieces and nephews. Alma was predeceased by her husband Norman; parents Peter & Anna Loose; sister, Molly Beisel and her husband Dave as well as her sons-in-law Randy Atkinson and Don Walde. Alma was born in Estuary, Saskatchewan on January 3, 1930 and was raised on a farm near Empress. After schooling in Chesterfield, she left the farm to join her sister Esther in Calgary, and begin her training at the Holy Cross Hospital to become a nursing aide. Her training then took her to the Crowsnest Pass, where she worked at the Blairmore Hospital. In 1952 she married Norman Merkel and moved to the Herronton district where they farmed for many years and raised their family of six children. In 1974, after selling the family farm, they moved to High River. Alma enjoyed serving in the Full Gospel Church and held many varied positions there. She was an avid reader and enjoyed music, sewing and painting. Alma will be lovingly remembered for her kindness, sense of style and her smiling brown eyes. She will be greatly missed by her family and friends, who considered themselves blessed to have known her. A Memorial Service was held on Friday, June 19th at 2:00 p.m. at the High River Full Gospel Tabernacle (1802 9th Ave. SE, High River). Memorial Donations can be made to the High River Full Gospel Church Local Missions (1802 9th Ave. SE, High River, AB, T1V 2A6). To send condolences and view Alma’s Tribute Page please visit www.lylereeves.com . Caring for the family is Lyle Reeves Funerals of High River 403.652.4242.

Mrs. Alma Merkel of High River, Alberta passed away on June 11, 2015 at the age of 85 years, in Okotoks, Alberta at the Tudor Manor, where she had resided since 2013. Alma is survived by her children Warren (Michelle) Merkel of Abbotsford,... View Obituary & Service Information

The family of Mrs. Alma Jerrilyn Merkel created this Life Tributes page to make it easy to share your memories.