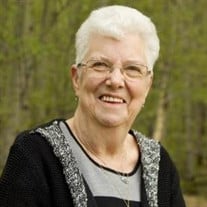 Alma Jean Robinson of High River, Alberta passed away on October 19, 2014 at the Foothills Medical Centre in Calgary at the age of 80 years. Alma is survived by her husband George Robinson; her sons Carl (Dulcy) Bentler, Martin Bentler, her daughters Gaylene (Hal) Henderson and Cathy (Ken) Robinson. She is also survived by someone very special, Teresa Bentler (Ken Jacobs). She is survived by her grandchildren; Dani (Dave) Sever, Travis (Paula) Bentler, Melanie (Erin) Bennett, Tricia (Travis) Swallow, Amy (Brian) Viens, Steven (Karen) Henderson, Donald Smith, Megan Robinson (Derek Kapler), Christopher Robinson; great grandchildren Grayson Sever; Hailey & Emma Bennett; Rylan, Mason and Kara Swallow; Isaac & Brooklyn Viens; Quinn, Kaiya and Hudson Kugler; and is also survived by her sister Mary Taron as well as numerous nieces and nephews. Alma was predeceased by her first husband Frank Bentler, her parents Fred and Ethel Coburn as well as three sisters and two brothers. Alma was born in Athabasca, Alberta and spent 18 years in Smith, Alberta. Alma worked in Westlock where she met and married her first husband Frank. Frank worked for Calgary Power where they spent time in many towns within Alberta. Alma was a Special Constable with the RCMP while they lived in Cardston. She married George Robinson in 1994 and they have resided in High River since 1999. Alma worked at Sobeys and Costco as a food demonstrator and thoroughly enjoyed chatting and visiting with all of the customers. Sewing was a passion for Alma and she made quilts for the grandchildren and great-grandchildren. She loved following curling and had many trips to many national and world curling championships. Her favourite travel destination was Hawaii where she had visited numerous times. She adored and doted on her grandchildren and great-grandchildren. Her passion was to have family dinners and events where she would cook everyone’s favourite dishes – no matter who sat at the table. A Memorial Service was held at the Highwood Golf and Country Club (400 – 7th Street NW, High River, AB) on Friday, October 24, 2014 at 1:00 p.m. Memorial Donations can be made to the Heart and Stroke Foundation, #100 119 – 14th Street NW, Calgary, AB, T2N 1Z6, www.heartandstroke.ab.ca To send condolences and view Alma’s Tribute Page please visit www.lylereeves.com . Caring for the family is Lyle Reeves Funerals of High River 403.652.4242.

Alma Jean Robinson of High River, Alberta passed away on October 19, 2014 at the Foothills Medical Centre in Calgary at the age of 80 years. Alma is survived by her husband George Robinson; her sons Carl (Dulcy) Bentler, Martin Bentler, her... View Obituary & Service Information

The family of Mrs. Alma Jean Robinson created this Life Tributes page to make it easy to share your memories.