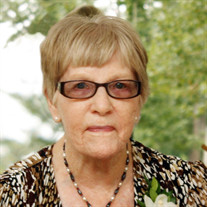 Annie Edith Winnifred Burke (Hicklin) of High River, passed away at the High River Hospital on Friday, October 8, at the age of 99 years. In her last few days, she was surrounded by the love of family and passed with grace when God called her home. Edith Burke is survived by her daughter Donna Tanner, her two grandsons Jordan (Heather) Tanner, and Nicholas (Amanda) Tanner, along with her four great grandchildren; Seren, Reid, Charlotte, and Robyn. She was predeceased by two husbands: Everett Hicklin, and Ernest Burke, and more recently by her son Dennis Hicklin. She is also survived by Dennis’s daughter Christine. Edith was born to Hugh and Ellen McArthur on July 15, 1922, in Whitewood Saskatchewan. The McArthur family headed North in 1928 to homestead in the Peace Country where they lived off the land for several years. After Hugh’s passing, Ellen married Clarence MacEachern and they eventually settled in High River. Edith followed suit in 1946 at the age of 24. She worked as a Ward Aid in the old High River Hospital, until she married Everett Hicklin in 1953. She and Everett raised their two children Donna and Dennis in High River, and Edith eventually returned to work in the dietary wing of the hospital for 20 years. Upon retiring she rallied with her minister and opened the first Salvation Army Thrift Store in the community. Edith remarried after Everett’s passing (1976) to Ernest Burke. The two of them shared many happy moments together in retirement until his departure in 1995. She remained in High River in her own apartment until a couple weeks after her 99th birthday this July. Edith will be remembered for her devotion to the Salvation Army Church and unwavering dedication to ringing the kettle bells every Christmas season. She officially retired after the 2019 season at the age of 97. She loved baking and continuously supplied baked goods to her children, grandchildren, friends, and church family. She kept her daughter's freezer stocked full of delicious eats while her kids were growing up. She always sent a stacked parcel to her son on the coast for the holidays and special occasions. Edith kept a positive mindset through the many ups and downs that spanned her 99 year stay on earth; “Never looked back, life goes on…” as she wrote in her 1999 story of her life. Edith and her entire family are forever grateful to all those in her community who enriched her life with acts of kindness and loving care; High River Handi-Bus staff, Hospital staff, Westwinds staff, Soderberg House neighbours, and her many friends in High River's amazing community. A private interment will be held at the High River Cemetery at a later date. If you wish to honour Edith’s legacy, please consider donating to the High River Salvation Army in lieu of flowers (119 Centre St SE, High River, AB T1V 1R7). Caring for the family is Lyle Reeves Funerals of High River (Craig Snodgrass) 403.652.4242.

Annie Edith Winnifred Burke (Hicklin) of High River, passed away at the High River Hospital on Friday, October 8, at the age of 99 years. In her last few days, she was surrounded by the love of family and passed with grace when God called her... View Obituary & Service Information

The family of Mrs. Annie "Edith" Winnifred Burke created this Life Tributes page to make it easy to share your memories.