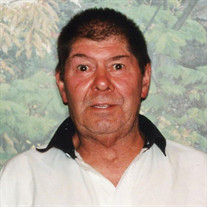 Arnold Champagne of Cayley, Alberta passed away on October 10, 2017 at South Health Campus Hospital at the age of 80 years. Arnold is survived by his wife, Vivien; Daughters, Tracey (Walter), Anita (Michael), Shelley, Michelle, and Mary Jane; sons, Tim (Darlene) and Brad (Debbie); Grandchildren, Tyler, Dover, Teigan, Dustin, Jaimie, Jaxon, Stephanie, Brittany, Jason, Jordan, Myles, Samantha, Kendra and Jaimee and many great grandchildren, nieces, nephews and extended family members. Arnold was predeceased by his mother, Mary Penman, sons Jeff Champagne and Todd Champagne, and his brother Henry Champagne. Arnold was born in Touchwood, Saskatchewan. He loved trains and told of vivid memories of riding the rails with his grandfather, who was an engineer. He moved to Calgary, Alberta when he was 16 and then to High River, Alberta in 1975. He worked at various jobs until 1972 when he began his employment with Rolling Mix Concrete, where he worked until his retirement in 2007. Arnold was a devoted lover of animals whose residence was always a haven for all of them, especially his dogs and cats, and the occasional guinea pig, bird, snake and hamster. He found a passion for playing golf at a late age, and shortly after starting got a hole in one. He was an avid sports fan, especially football, Go Riders!! A Celebration of Arnold’s Life was held on Saturday, October 14th at 2:00 p.m. at the Cayley IOOF Hall (Hammond Street), Cayley, Alberta. Memorial Donations can be made to the Heaven Can Wait Animal Rescue Foundation www.heavencanwait.ca . Caring for the family is Lyle Reeves Funerals of High River (Craig Snodgrass) 403.652.4242.

The family of Mr. Arnold Edward Champagne created this Life Tributes page to make it easy to share your memories.

Arnold Champagne of Cayley, Alberta passed away on October 10,...