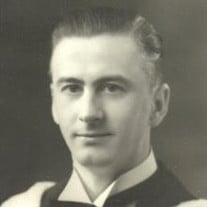 Arnold Wallace Facey passed away at the Foothills Hospital on January 31, 2015, twelve days short of his 91st birthday. Arnold was born Feb. 12, 1924 in Boissevain, MB, the second son of Ernest Albert and Clara (Hill) Facey. He grew up on the family farm in the Dunallen District and attended school there. He then went on to attend Boissevain High School. After graduation he joined the RCAF in November 1943 and served as an Air Gunner until being honourably released in Jan. 1945 with the rank of Sergeant. He then attended United College (University of Manitoba) graduating in 1948 with a degree in law. After practicing for a while in Winnipeg, the West was calling this young man and he moved to Calgary in 1953. He was called to the Alberta Bar in Sept. 1955 after which he practiced law in Calgary for 35 years, retiring in 1989. During this time several harvests were happily spent running a combine on farms in the Strathmore and Cochrane areas for a change of pace. Arnold never married and was “the captain of his own ship, so to speak”, even up to his last days in hospital which he found very frustrating when he lost so much of his independence. In his younger days he loved to play baseball & chess, then came curling & shuffleboard and he found it hard to give up golf when his eyesight deteriated. He will be forever dearly remembered by his many nieces & nephews and their families for the teasing they took from him over three generations. He was indeed “a character” as many friends and family will attest to. When you left him to babysit your kids you sort of knew that it was going to be them babysitting Arnold! But he was a man of integrity, viewing his dad as the example of how he wished to be remembered. He will be sadly missed by his sister and brother-in-law, Marjorie June & Howard Harrison, twelve nieces and nephews and many great nieces & nephews. He was predeceased by his parents, his older brother Leslie Ernest in 1967, his younger sister Florence Marion Sadler in 1998 and two nieces Debbie (Harrison) Beckner and Sharon (Facey) Smith. Cremation has taken place and his resting place awaits him in the Boissevain, MB cemetery in the spring. At that time a memorial service will be held. If friends so desire donations may be made to the Rowan House Emergency Shelter in High River, Alberta (www.rowanhouse.ca). To send condolences and view Arnold’s Tribute Page please visit www.lylereeves.com . Caring for the family is Lyle Reeves Funerals of High River (403.652.4242).

Arnold Wallace Facey passed away at the Foothills Hospital on January 31, 2015, twelve days short of his 91st birthday. Arnold was born Feb. 12, 1924 in Boissevain, MB, the second son of Ernest Albert and Clara (Hill) Facey. He grew up on... View Obituary & Service Information

The family of Mr. Arnold Wallace Facey created this Life Tributes page to make it easy to share your memories.

Arnold Wallace Facey passed away at the Foothills Hospital on...