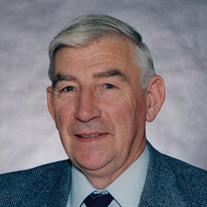 Arnold (Arnie) Rahn of Nanton, Alberta passed away suddenly, after a brief battle with cancer, on January 15, 2019 at the High River Hospital at the age of 82 years. Arnie is survived by his beloved wife, Merle of 58 years; Children: Greg (Judy) Rahn, Darryl (Gayle) Rahn, and Shari (Kyle) Fijal; Grandchildren: Katherine (Jess), Braeden, Jordan, Steven, Landon, Dylan, and Carson; Step-Grandchildren: Taylor, Jordan, and Alexandria; Great Grandchildren: Lauren, Olivia, and Maeryn; and numerous Nieces and Nephews. Arnie was predeceased by his parents Henry and Martha; and three sisters: Alma, Meta and Hildegarde. Arnie was born on the family farm in Amaranth, Manitoba on June 13th, 1936 where he lived and worked until 1966. Having three much older sisters Arnie often joked that he was raised by four mothers. Arnie met Merle in 1958 and were wed on July 16th 1960. Greg arrived in August of ’61, Darryl in November of ’63 and Shari in September of ’65. With a family of 5 and a farm that would not support them, Arnie and Merle decided to move to Brandon in search of a better life for their children. Arnie was hired by the city of Brandon as a police officer, beginning service September 6th 1966. He worked through the ranks as a Constable and Corporal; retiring as a plain clothes Detective Sergeant on January 3rd 1997 at which time his children were raised, educated, and moved on to raising their own families. In the spring of 1997, Arnie and Merle moved to Nanton, Alberta where they built a house allowing Arnie to continue his love of gardening with the mountains as his backdrop. They remained in that house for 16 years until they downsized to a condo. In his lifetime he had many hobbies and interests such as Woodworking, curling, gardening, and shared a love of travel with his wife. Over the years Arnie travelled with Merle to destinations such as: Hawaii, Jamaica, Cuba and Mexico. Arnie was an active member of the Nanton United Church and a founding member of the Nanton Farmer’s Market which he managed personally for 12 years. It was at this market where he sold his amazing barn board creations to appreciative customers far and wide. A Memorial Service was held on Saturday, January 26th, 2019 at 2:00 p.m. at the Nanton United Church (2121 – 21st Street), Nanton, AB. Memorial Donations can be made to the Nanton United Church, Box 759, Nanton, AB T0L 1R0 or the High River Hospital District Health Care Foundation (Palliative Care Unit) 560 9th Avenue SW, High River AB T1V 1B3 or a charity of your choice. To send condolences and view Arnie’s Tribute Page please visit www.lylereeves.com . Caring for the family is Lyle Reeves Funerals of High River (Craig Snodgrass) 403.652.4242.

Arnold (Arnie) Rahn of Nanton, Alberta passed away suddenly, after a brief battle with cancer, on January 15, 2019 at the High River Hospital at the age of 82 years. Arnie is survived by his beloved wife, Merle of 58 years; Children: Greg (Judy)... View Obituary & Service Information

The family of Mr. Arnold Henry Rahn created this Life Tributes page to make it easy to share your memories.