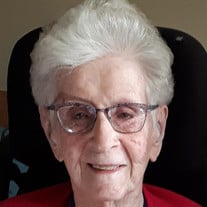 Born on December 27, 1924, Betty Jones (nee Van Vliet) passed away peacefully at the age of 94 years on January 5, 2019. Betty was born to Lawrence and May Van Vliet and raised on the family farm in Lacolle, QC along with her brothers Alan and Jack and her sister Joyce. After graduating from Huntingdon High School she moved to Montreal where she worked for the Royal Bank for a year because she was too young to be accepted into her chosen career of nursing. Betty graduated from the Montreal General Hospital as a Registered Nurse in 1946. Betty was proud of her nursing career, in particular her time as Head Nurse of the Children’s Ward. After graduation, Betty joined two girlfriends for a vacation to Pine Lodge in Bristol, QC. There she met and fell in love with a handsome young man named Paul Jones who had served in the RCAF during WWII before returning home to Montreal. In August 1950 they married and together Betty and Paul lived in Montreal, QC, Candiac, QC, Saint John, NB and Scarborough, ON, enjoying an active social life and making lifelong friendships in each city. After nearly 46 years of marriage Paul passed away in 1996 and Betty moved to Unionville, ON and then to retirement residences in Oakville, ON and Guelph, ON before deciding to move to Okotoks, AB in 2016 at the age of 91 where she cherished visits from her great-grandson. Betty will be lovingly remembered by her daughters Wendy (Brian) Girard of Okotoks and Deborah (Ilver) Fabbri of Guelph, her grandchildren Michelle, Greg and Jordan, her great-grandson Tanner, her sister Joyce Gill and her family as well as many other nieces and nephews. At Betty’s request there will be no visitation or service. Her ashes will be interred next to her beloved husband Paul at Elgin Mills Cemetery in Richmond Hill, ON at a later date. If desired as an expression of sympathy, memorial donations to Multiple Sclerosis Society of Canada would be greatly appreciated www.mssociety.ca. To send condolences and view Betty's Tribute Page please visit www.lylereeves.com. Caring for the family is Lyle Reeves Funerals of High River (Craig Snodgrass) 403.652.4242.

Born on December 27, 1924, Betty Jones (nee Van Vliet) passed away peacefully at the age of 94 years on January 5, 2019. Betty was born to Lawrence and May Van Vliet and raised on the family farm in Lacolle, QC along with her brothers Alan and... View Obituary & Service Information

The family of Mrs. Betty Jones created this Life Tributes page to make it easy to share your memories.