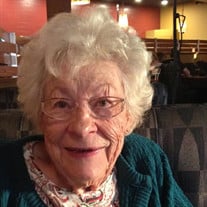 Mrs. Blanche Malcolm (Laughren) of High River, Alberta passed away peacefully surrounded by her family at the High River Hospital on January 30th, 2019 at the age of 92 years. Blanche is survived by her daughter - Gerri (Dave) Wilcox and their children – Shauna (Trevor) Greer, Mark (Kerri) Wilcox, Dan (Wanda) Wilcox; her son Bob Malcolm; her daughter Dawn Malcolm (Bob Dyck) and their children Devin (Cassie) Warne, Zach Warne, Jodi (Dave) Benediktson, Lindsay (Craig) Snodgrass, Caylee (Brady) Rokosh and Mitch (Krista) Dyck; great grandchildren – Shauna – Avery and Emery, Mark – Noah and Titan, Dan – Linden, Jodi – Randi and Tevin, Krista – Xand, Joss and Magnus, Lindsay - Oren and Caylee – Lou. Blanche is also survived by her siblings Ron (Marlene) Palmer and Marge Braaten as well as her special niece Maureen Siegfried. Blanche was predeceased by her husband Lynden Everett Malcom and her mother Agnes Laughren Palmer. Blanche was born on June 6, 1926 in Calgary, Raised in the Queenstown, Majorville area by her Mom and Grandparents as her Dad had passed away before her birth. She had a fondness for horses and her favorite was a black percheron named Blackie. She would often reminisce of their adventures. Early schools were in Clooney and Gleichen. She attended the Holy Cross Nursing School in Calgary and graduated as Registered Nurse in 1949. Blanche first met Lynden when he and his brother were on a cattle drive. They stopped by the Johnson farm, where Blanche was living with her grandparents to water their horses. He was 16 and she was 14. We don’t know if it was love at first sight but it did blossom into love later on as they were married May 5 1950. Blanche and Lynden moved to Edmonton shortly thereafter where they started their family. Blanche worked as a Registered Nurse at the Royal Alexander Hospital for 30 years in the X-Ray (Diagnostic Imaging) department for the entire time. To the very end she was known as one of the few nurses who still wore her nursing cap, white uniform, white stockings and white shoes. After retiring they moved to Calgary and in 1999 she moved to High River. Blanche was a woman before her time. Lynden often worked for long periods out of town and Blanche was left with three young kids to look after and a full time job. Dinner was always made and the kids were always in bed on time and she often did it alone. Even though she had retired from nursing, she was always a nurse. She had a kind heart, gentle hand and a wicked sense of humour. She would lead you along on a tale and then couldn’t keep it in and would give you that smile and twinkle in her eye. You knew you’d been had. Blanche enjoyed her grandchildren and especially liked baking them cookies and her famous Banana Bread. Blanche was an amazing cook not in the gourmet sense but honest to goodness down home cooking sense. Her Sunday roasts and Yorkshire puddings were prize worthy. It ensured that the dinner table was always full. She was a lady and every week would get her hair done. It was not an appointment to be missed, ever! So much so, that when the flood hit High River in 2013, she was rescued from the Hair Salon, in a canoe. We will miss her. Memorial donations may be made to the Calgary Humane Society, Alberta Animal Rescue Crew Society or choice of charity. A come and go gathering will be held on Saturday, February 16th from 2:00 p.m. to 4:00 p.m. at Lyle Reeves Atrium (140 6th Ave. SW, High River). Caring for the family is Lyle Reeves Funerals of High River (Craig Snodgrass) 403.652.4242.

Mrs. Blanche Malcolm (Laughren) of High River, Alberta passed away peacefully surrounded by her family at the High River Hospital on January 30th, 2019 at the age of 92 years. Blanche is survived by her daughter - Gerri (Dave) Wilcox and their... View Obituary & Service Information

The family of Mrs. Blanche Aileen Malcolm created this Life Tributes page to make it easy to share your memories.