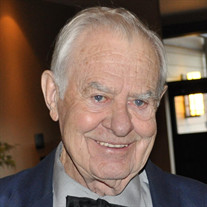 Mr. Bob Gibson of High River, Alberta passed away at the Foothills Hospital in Calgary on December 14, 2016 at the age of 79 years. Bob is survived by his loving wife Alice; children Dan (Dorothy) of Dartmouth, NS, David of the world, Dean (Debbie) of Bragg Creek, AB and Allison of Melbourne, AUS; grandchildren Amber, Sean (Pam), Scott (Danielle), Brad (Leah), Charlie, Kate, Will, Tom, Harry and Grace; great-grandchildren Max, Robbie, Madelaine and Sophia; cousins Michael and Ted (Melanie) as well as his aunt Pauline. Bob was predeceased by his father Harry and mother Dorothy; his grandparents Daw and Meg Cochrane. Bob was born in Calgary and attended Crescent Heights High School, near the Bow River, where he met Billie Alice and apparently impressed her with his competitive hockey and football skills whilst working at Burns Meat Packers in the Inglewood Area. Alice and Bob began chasing drilling rigs for Magcobar where Bob spent the next 20+ years in Central and Southern Alberta, Calgary, Nova Scotia as well, as Alaska. Between checking rigs and managing drilling fluids people, Bob and Alice managed to have 4 children. Bob enjoyed curling, camping, travelling but his greatest passion became golfing with family and friends of which he had many. Over the decades, Bob spent many hours at rinks, ball fields, gyms and golf courses watching and coaching his children and grandchildren. After more than 20 years with Dresser Magcobar, Bob furthered his career managing and owning Ace Resources running drilling fluids people and investing in oil and gas plays. Bob gradually retired from Ace Resources after almost 3 decades to live, love and play golf at Highwood Golf and Country Club. To say Bob was loved and respected in his High River community would understate his presence among his neighbours, family and friends. Throughout their 62 year marriage, Bob and Alice were adventurous and often traveled to spend time; with Dan and Dorothy and their family in Nova Scotia, with Allison and her beautiful kids in Australia, with David and his family in Mexico and Vancouver and with Dean and his dogs in Bragg Creek. Byron Bay was perhaps Bob’s favourite place to hang out. Bob knew how to love intensely. His big bear hugs, great sense of humour, strength of character and loyal friendship will be greatly missed. Great husband. Great Dad. Great Grandfather. Great friend. A Celebration of Bob’s Life was held on Wednesday, December 21st at 1:00 p.m. at the Highwood Golf & Country Club (400 7th St. NW, High River). In lieu of flowers the family have asked for donations to be made to the High River District Health Foundation (560 9th Ave. SW, High River, T1V 1B3) or a charity of the donor’s choice. To send condolences and view Bob’s Tribute Page please visit www.lylereeves.com . Caring for the family is Lyle Reeves Funerals of High River (403.652.4242).

Mr. Bob Gibson of High River, Alberta passed away at the Foothills Hospital in Calgary on December 14, 2016 at the age of 79 years. Bob is survived by his loving wife Alice; children Dan (Dorothy) of Dartmouth, NS, David of the world, Dean... View Obituary & Service Information

The family of Mr. Bob Gibson created this Life Tributes page to make it easy to share your memories.

Mr. Bob Gibson of High River, Alberta passed away at the Foothills...