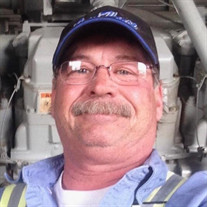 Brent Sinclair passed away February 14, 2022 at home in High River at the age of 56 years. Brent is survived by his wife Debbie, daughter Danielle (Curtis), son Travis (Michelle), grandchild Aveleen, mother Mary, sisters and brothers Clarisie (James), Elise (Gregg), Lucianne (Lonny), Clinton, Carina (Bob), as well as many nieces and nephews. Brent was predeceased by his father Clarence. Brent was born in Ogema SK, where he spent his childhood until the age of 16 when he moved to Weyburn SK to finish his schooling. In 1989, Brent met Debbie of Macoun SK, shortly afterwards the oil patch moved them to Swan Hills AB where they spent 10 years. During that time, they had two children, Danielle and Travis. Later they moved to High River AB to raise their family. Brent continued to work in the oil patch, working at times in Swan Hills and High River. High River is where Brent loved to call home. Brent was very proud of his children and was always their biggest supporter. Due to working up north Brent had to spend a lot of time away from home, but looked forward to Travis’ hockey games, just hanging out in the yard with his family, and Debbie’s endless house renovations. In 2013 Brent’s greatest gift was the birth of his first granddaughter, Aveleen. They enjoyed taking nature walks in the forest, fishing, and picking the neighbors berry bush. He couldn’t wait to have his house filled with more grandkids. Brent deeply loved all his family, stayed connected with friends, and will be greatly missed. A Celebration of Brent's Life will take place at the Highwood Memorial Centre on Monday, February 21, 2022 at 2:00 PM. Caring for the family is Lyle Reeves Funerals of High River (Craig Snodgrass) 403.652.4242.

The family of Mr. Brent William Sinclair created this Life Tributes page to make it easy to share your memories.