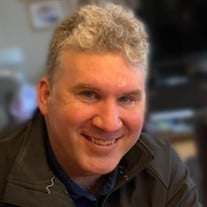 It is with great sadness that we announce the unexpected loss of Brian Richard Paquette on November 13, 2021, at the age of 52. Brian was born in St. Paul, Alberta to Rose and Jean-Guy Paquette on October 23, 1969 and worked on the farm with his dad while he was growing up. He met Denise Wilson playing slo-pitch in 2001, and they went on to be married on September 20, 2003 and have 3 kids together; Jeremie, Hannah, and Caleb. He was baptized and received in the Catholic Church in September of 2007. Brian worked for 15 years with Rachynski Land Surveys and later Explore Surveys. After moving to High River, he appreciated the friendships he developed with his crews at the M.D. of Foothills. Brian was a passionate Montreal Canadiens fan, he loved playing slo-pitch, fishing, and spending time outdoors. He really loved watching his kids play hockey and taking them to be with the horses at the farm. Brian was a caring father and loved his family. Brian is survived by his wife Denise Paquette, his 3 children Jeremie, Hannah, and Caleb, his brother Mitchell (Julie) Paquette, his niece Mallory (Chris) and their children Ethan, Cody, Trevor, and Julia, parents-in-law Dave and Odile Wilson, brother-in-law Daryl (Nicole) Wilson and their children Renée, Keira, and Monica, brother-in-law Don Wilson, sister-in-law Leanne (Elie) Plamondon and their children Zachary and Noah, numerous aunts, uncles, and cousins, as well as his special uncle Claude Paquette. He was predeceased by his parents Rose and Jean-Guy. A livestream of the Funeral Mass will be available on Brian’s tribute page at www.lylereeves.com on Saturday, November 27 at 2:00pm. A reminder for those attending: The Funeral Mass will take place at St. James Parish in Okotoks. Memorial donations may be made to the Alberta Children’s Hospital Foundation www.childrenshospital.ab.ca (28 Oki Drive NW, Calgary AB T3B 6A8) The family would like to extend a special thank you to the High River EMS, Fire Department, and RCMP for their care of our family. Caring for the family is Lyle Reeves Funerals of High River (Craig Snodgrass) 403.652.4242.

It is with great sadness that we announce the unexpected loss of Brian Richard Paquette on November 13, 2021, at the age of 52. Brian was born in St. Paul, Alberta to Rose and Jean-Guy Paquette on October 23, 1969 and worked on the farm with... View Obituary & Service Information

The family of Mr. Brian Richard Paquette created this Life Tributes page to make it easy to share your memories.

It is with great sadness that we announce the unexpected loss...