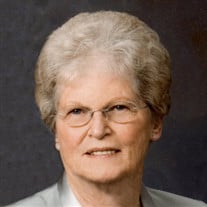 Maxine Nelson of Nanton, Alberta passed away suddenly on October 13, 2018 at the High River Hospital at the age of 81 years. Maxine is survived by her loving husband of 60 years, Ralph; daughters Audrey (Blaine) and Kathy; grandchildren, Jeff, Chase, Derek, and Chelsey (Jordie); sister Shirley; sister in law Marguerite; as well as numerous nieces and nephews. Maxine was predeceased by her mother Ilah, father Raymond, brothers Norris, Sidney and Percy and sisters Gladys and Marjorie. Maxine was born at Blackfalds, Alberta and grew up on her family farm with her mother, father and 6 siblings. She loved being on the farm and helping her father. She later moved to Red Deer to go to High School and took a job at The Peacock Inn, where she later met the great love of her life, Ralph. They were married in 1958 and moved to Ralph’s family’s farm in the Meadowbank area. Later that year their first daughter, Audrey was born and their second daughter Kathy followed soon after in 1960. Maxine continued her love of working on the farm raising chickens, cattle, kids and a large garden. She was very active in the Meadowbank community, always making newcomers feel welcome. Maxine found great joy helping coach the Meadowbank girls’ fastball team. Once the girls were grown, Maxine became involved with the Eastern Star in High River. When Ralph took up flying, they joined the Flying Farmers and were very active within the organization. When Ralph and Maxine retired from the farm and moved to Nanton they had more time to focus on there golfing, travelling and four grandchildren. Family was very important to Maxine. After retiring, she filled some of her time volunteering with Ralph at the Bar U Ranch. She also began playing cards regularly in Nanton at the Kozy Korner. Maxine was always very competitive, even when teaching her grandchildren how to play cards. She continued to play cards competitively right up until her passing. She will be greatly missed by her loving family and many friends. A Celebration of Maxine’s Life will be held on Friday, October 19th at 2:00 p.m. at the Meadowbank Community Hall. If desired memorial donations may be made to the High River District Health Care Foundation (560 9th Ave. SW, High River, T1V 1B3). To send condolences and view Maxine’s Tribute Page please visit www.lylereeves.com . Caring for the family is Lyle Reeves Funerals of High River (Craig Snodgrass) 403.652.4242.

Maxine Nelson of Nanton, Alberta passed away suddenly on October 13, 2018 at the High River Hospital at the age of 81 years. Maxine is survived by her loving husband of 60 years, Ralph; daughters Audrey (Blaine) and Kathy; grandchildren, Jeff,... View Obituary & Service Information

The family of Mrs. C. Maxine Nelson created this Life Tributes page to make it easy to share your memories.

Maxine Nelson of Nanton, Alberta passed away suddenly on October...