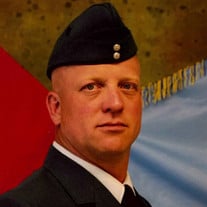 Captain Reid Leslie Habing, CD of Cayley, Alberta passed away on February 11th, 2019 at the age of 42 years. Reid is survived by his loving wife Natasha; his children Austin, Keiran and Jenna; by parents Tanna (Dan) Banks; Les (Judy) Habing; Bill & Karyle Young; siblings, Tracey (Dave) Gill; Mitch Banks; Hayley (Iain) Havelock; Keith (Nicole) Banks; Amanda (Roger) Young; nieces and nephews, Kyra, Dayne, Ben, Owen, Morgan, and Colby; his special friends, Polly & Luigi Di Clemente, and friends and family too numerous to name. Reid Habing was born in Pine Falls, Manitoba on December 24, 1976 and grew up in Abbotsford, BC where he developed a strong foundation of friends he would build on throughout his life. After meeting his soul mate in Okotoks, he moved back to BC promising the love of his life that he would move back and put a ring on her finger. In October of 1996 they started dating and later married on September 18, 1999. This was the beginning of a beautiful life and family, of which Reid was unabashedly proud to call his own. Reid had a personality that was bigger than life. He devoted his time to his family and poured all of his spare time into his beloved cadets at the 187 Foothills Royal Canadian Air Cadet Squadron and was proud to see his sons follow in his footsteps. Jenna, as a Habing, you are part of a unique family that seldom follows the norm. We often carve a new individual path, we make a new box instead to try to fit in the old one. But above all, our strongest trait is...WE ARE SURVIVORS, WE ALWAYS GET BACK UP, NO MATTER HOW FAR WE FALL. So time to dig deep and find the Habing in you. Time to blow everyone away and carve a new path. Time to get back up baby. Love, Daddy. In lieu of flowers memorial donations may be made to the 187 Foothills RCACS Sponsoring Association – Box 5124, High River, AB, T1V 1M3 or by etransfer to [email protected] A Celebration of Reid's Life was held on Wednesday, February 20th at 2:00 p.m. at the Highwood Memorial Centre in High River. To send condolences and view Reid’s Tribute Page please visit www.lylereeves.com . Caring for the family is Lyle Reeves Funerals of High River (Craig Snodgrass) 403.652.4242.

The family of Captain Reid Leslie Habing, CD created this Life Tributes page to make it easy to share your memories.