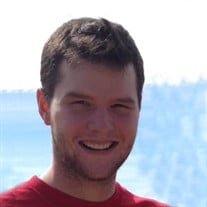 Mr. Carter Corrigan of High River, Alberta passed away suddenly on December 20, 2014 at Mazeppa, Alberta at the age of 19 years. Carter is survived by his loving parents Brent and Kim Corrigan; sisters Alandra Corrigan and Marley Corrigan; his loving girlfriend Laurin Hartley; grandparents John (Eva) Ingram and Bob (Marie) Corrigan; Aunts and Uncles - Brad (Debbie) Corrigan, Lee (Ted) Timpano, Karen (Gordon) Morris, John (Tricia) Ingram, Kandace (Dan) McArthur; Cousins – Jeremy, Toni, Andrew, Riley, Calum, JC, Nathan, Raquel, Madison and Chas. Carter was predeceased by his cousin Travis. Carter was born in High River and did his schooling between Okotoks, Blackie and High River. He was currently attending his 3rd year of Engineering at the University of Alberta in Edmonton. Carter was the quarterback for the Highwood Mustangs where he also played basketball, rugby, badminton, curling, volleyball and golf. He played his Midget hockey in Blackie and was always the fun loving and quick witted player that all of his teammates and coaches loved. Carter made everyone feel loved and was never afraid to say it or show it with a hug. Carter connected with people immediately and along with all of his friends in High River and Blackie. He also had many close friends at the University of Edmonton where Carter was a legend in the Lister Dodgeball league. Carter passed away suddenly with his great friend and teammate of many sports, Eli Gosselin. Carter will be greatly missed by many. We love you buddy, you will live on in all of our hearts forever!! We will never forget you! A Celebration of Carter’s Life was held on Sunday, December 28, 2014 at 1:00 p.m. at the Highwood Memorial Centre in High River (128 - 5th Ave. W, High River). To send condolences and view Carter’s Tribute Page please visit www.lylereeves.com . Caring for the family is Lyle Reeves Funerals of High River (403.652.4242).

The family of Mr. Carter F. Corrigan created this Life Tributes page to make it easy to share your memories.