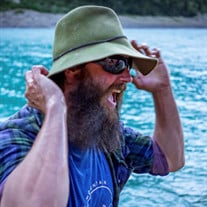 It is with great sadness that we announce that Chad Jefferey Kendrick, 43, passed away on February 26, 2022 at his home in Turner Valley, Alberta, after his long battle with Amyotrophic Lateral Sclerosis (ALS). Chad was surrounded by his family and loved ones at the end. Chad fought a courageous crusade against ALS and is now at peace, watching us from a high mountain top alongside his loving parents. Chad was born on October 25, 1978 in Calgary, Alberta to Robert John and Beverley Ann Kendrick. After attending the University of Lethbridge for a few years, he decided to surrender to his desire to travel and move to Australia. During his more than 12 years in Sydney, Chad pursued his many creative talents. This included graduating from film production college, years of modelling for a leading agency, and most prominently he followed his love of music. Chad was in several successful bands while in Australia and spent a great deal of time touring and recording albums locally and abroad, which heralded various awards including Best Rock Band in Australia. It was also in Sydney where Chad met his future partner and wife, Erin. Upon their eventual return to Canada, Chad rekindled his love of the outdoors, spending much of his time fishing, hunting and camping throughout Alberta and BC. It was on one of their ventures where his idea to create an outdoor company, Treeline Outdoors, was conceived. Aside from the day he and Erin married, Chad’s most special day was the one where their son, River was born. Chad’s fight against ALS on a daily basis, was always buoyed by his love for River and Erin. Chad has always had a big heart, literally willing to give someone the shirt off his back. He is loved by all that had the good fortune to know him throughout the world. Chad leaves behind his beloved wife Erin and son River, his brother Troy Kendrick (Mystique Uwins), brother Steve Kendrick (Lindsay, nee Taekema), his nieces Ella and Oliva, as well as many uncles, aunts and cousins and very close friends. We would like to thank the ALS Society of Alberta and especially all of the nurses and care-givers that provided their support over the years. There will not be a funeral, but the family will hold a Celebration of Life when time allows. In lieu of flowers, we ask that a charitable donation be made to the Alberta Conservation Association (ab-conservation.com) in Chad’s name. Ride into the lightning! Caring for the family is Lyle Reeves Funerals of High River (Craig Snodgrass) 403.652.4242.

It is with great sadness that we announce that Chad Jefferey Kendrick, 43, passed away on February 26, 2022 at his home in Turner Valley, Alberta, after his long battle with Amyotrophic Lateral Sclerosis (ALS). Chad was surrounded by his family... View Obituary & Service Information

The family of Mr. Chad Jefferey Kendrick created this Life Tributes page to make it easy to share your memories.

It is with great sadness that we announce that Chad Jefferey...