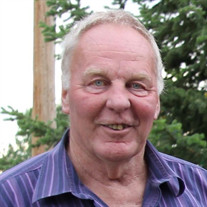 Chuck Hurl of High River, Alberta passed away at the Foothills Hospital in Calgary on December 21, 2020 at the age of 69 years. Chuck is survived by his wife Linda, daughter Lawna (Glen Gerlat), son Troy (Jodi), and grandchildren Lyla, Kylie, and Deacon Gerlat, his father Ted Hurl, sister Leslie (Jim Fitzgerald), brother Doug Hurl (Lisa), mother-in-law Elinor Miller, brother-in-law Gregg Percival (Pete) and countless nieces and nephews, all of whom will miss him very much. Chuck was predeceased by his sister Laurie Patterson and mother, Thelma. Chuck was born in Brooks, Alberta, the oldest of four siblings and always the biggest, strongest kid on the block. The family eventually settled in High River and has been a fixture in the community ever since. A standout athlete, Chuck played football, rugby, baseball, hockey and golf and was an award-winning hockey coach where he shaped the character of a generation of High River’s youth. Chuck followed his father’s career path into utility construction, working his way up to the executive ranks and eventually owning his own company called JLT Construction. Chuck travelled as far as Australia and South Africa but a favourite destination was the family cabin in Montana. Driving the boat all day while his grandkids had the time of their lives was a cherished pastime. His grandkids adored sharing jokes and riddles with Papa and soon everyone would be laughing. Chuck lived the life he wanted to live and maintained his sense of humour and thoughtfulness to the end, reconciling his praise for the Alberta health care system with his viewing of Fox news with conviction and a smirk. In lieu of flowers, donations may be made in memory to the Tom Baker Cancer Centre, 1331 29 Street NW, Calgary, AB T2N 4N2, 403-521-3433, albertacancer.ca/in-memory . A Celebration of Life was held on Sunday, August 29, 2021 from 2:00 p.m. to 4:00 p.m. at the Wellman Room of the Highwood Golf and Country Club, 400 - 7th Street SW, High River, Alberta. Caring for the family is Lyle Reeves Funerals of High River (Craig Snodgrass) 403.652.4242

Chuck Hurl of High River, Alberta passed away at the Foothills Hospital in Calgary on December 21, 2020 at the age of 69 years. Chuck is survived by his wife Linda, daughter Lawna (Glen Gerlat), son Troy (Jodi), and grandchildren Lyla, Kylie,... View Obituary & Service Information

The family of Mr. Chuck Edward Hurl created this Life Tributes page to make it easy to share your memories.

Chuck Hurl of High River, Alberta passed away at the Foothills...