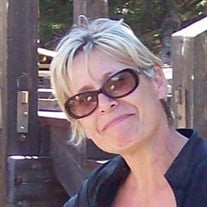 We are sad to announce the passing of Cindy in Tijuana, Mexico on April 1, 2017. Born in Lethbridge AB on November 6, 1960, Cindy will be sadly missed by her long time loving common-law husband Bill Dobra; daughter Victoria (Mike) Monteith and grandson Benton of Carstairs AB and daughter Chantel (Lauren) Sinnott, of Vancouver. Cindy is also survived by her Father Garth Whitford of High River, AB; Sister Tami (John) Cartwright of Salmon Arm, B.C.; brother Darcy (Bonny) Whitford of Okotoks, AB; sister Sherry Whitford (Nolan) of Whitecourt, AB; sister Shelley Lippert of High River AB and cousin Tracey (Ryan) Wilson of High River, AB. Cindy is also survived by her many nieces and nephews. Cindy was an entrepreneur in many branches of her life, and a real go getter. Cindy wasn't scared to tackle or take on something new that was a challenge, she was involved with The Metis and First Nations people and was well versed and informative in assisting with the many aspects of their lives and ways. Cindy had a love for animals and has had quite a foray throughout her life from potbellied pigs, bunnies, chickens, donkey's and of course her beloved dogs and kitties, and not to forget the Marmot family under the barn that she talked to and fed, and bird feeders for every type of bird in the area. Cindy would walk up her hill behind the barn every day with her dog, on up to her lookout platform that Bill constructed for her, to lookout over the farm below and gaze for miles and miles around in every direction. Down below was one of Cindy's favourite places to be, the Pincher Creek. The creek was Cindy's treasure trove for finding old Buffalo bones, and skulls and many other treasures that would wash down after a high water or flood, every time she'd come back from that creek she was never ever empty handed. Cindy was also an avid antique collector and could wheel and deal with the best of them, and she would get a good deal almost every time on her purchases. Cindy finally found her niche in the working world by becoming a licensed real estate agent. It was a challenging job with lots of numbers to crunch and lots of housing rules to learn. This was right up her alley, as Cindy truly was a people's person. Cindy was honest and up front with her clients whether buying or selling homes, and she knew how to get them her best deal. Cindy you will be missed by so many, as you have touched so many, many people's lives your reach was far and beyond. As per Cindy's wishes she declined having a funeral service. A family, friends event to take place at a later date. A very special thank you to George Sinnott for getting Cindy and Bill to Tijuana and back. For being there for them the entire time and supporting them in every way possible. We the family are eternally grateful to you. Another special thank you to Vern and Lucille Thompson for tending the farm and animals and all else you have done for Cindy & Bill. To family and friends for your support and well wishes throughout this difficult time, thank you. To send condolences and view Cindy’s Tribute Page please visit www.lylereeves.com . Caring for the family is Lyle Reeves Funerals of High River (403.652.4242).

We are sad to announce the passing of Cindy in Tijuana, Mexico on April 1, 2017. Born in Lethbridge AB on November 6, 1960, Cindy will be sadly missed by her long time loving common-law husband Bill Dobra; daughter Victoria (Mike) Monteith and... View Obituary & Service Information

The family of Ms. Cindy Sinnott created this Life Tributes page to make it easy to share your memories.

We are sad to announce the passing of Cindy in Tijuana, Mexico...