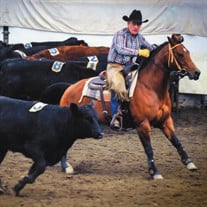 Mr. Clifford Hooker of Nanton, Alberta passed away on December 15, 2020 at Vulcan Community Health Centre at the age of 75 years. Cliff is survived by his wife Doreen; daughters Karen, Wendy (Cory), Paula(Victor) and son Richard; seven grandchildren, Amber, Brandy, TJ, Mckenzie, Brandon, Jordyn and Trevor, and five great-grandchildren; brother James and sister Valerie as well as nieces and nephews. Cliff was predeceased by his parents William & Eileen. Cliff was born in Vernon, British Columbia where he spent his early years before moving to Salmon Arm, Prince Rupert, Houston and Prince George B.C., then to Nanton AB in 1996. Cliff was an Automotive Mechanic by trade and owned and operated several service stations before moving to Nanton, but his passion was horses. After he and Doreen moved to Alberta, they bred, trained and showed Appaloosa horses for many years. Their stallion Two Eyed Jackson is still the Leading Sire of Appaloosas in the Appaloosa Horse Club of Canada. In the last few years, Cliff was fanatical about Team Cattle Penning, and was a member of the Chinook Team Penning Association and the South Country Penning Association as well as riding in the National Finals of the Canadian Team Cattle Penning Association. He was also the Treasurer of the Nanton and District Lions Club, and a member of the Centennial Horse Club. Cliff was well known for helping anyone with anything. He was always giving a hand to anyone who needed it, whether with horses, cows, any mechanical equipment, or to cook for flood victims. Memorial Donations can be made to the Nanton and District Lions Club in lieu of flowers. A Celebration of Life will be held in the Spring of 2021, Covid permitting. Caring for the family is Lyle Reeves Funerals of High River (Craig Snodgrass) 403.652.4242.

The family of Mr. Clifford Lewis Hooker created this Life Tributes page to make it easy to share your memories.

Mr. Clifford Hooker of Nanton, Alberta passed away on December...