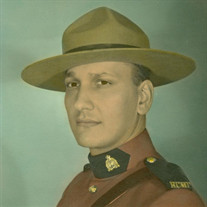 Cyril “J” Fugard was born and raised in Fort Erie, Ontario. In his younger years Cyril attended Rose Seaton School and Fort Erie High School where he was a star basketball player. He also exceled as a trumpet player in the school band, dance band and the marching band. During his life, Cyril kept involved in his “fun” pursuits with softball, curling, skiing and golf. Cyril joined the RCMP when he was 18 and took his basic training at Depot Division in Regina. When he completed his training, he was asked to join the RCMP band, but he decided he’d rather be in the regular force and went that route instead. Over his RCMP career, Cyril was stationed in four provinces and one territory: Portage La Prairie, Hodson and Winnipeg Beach, Manitoba; Fort Smith, Reliance and Coppermine (now Kugluktuk), NWT; Montmarte and Regina (twice), Saskatchewan, and twice in Ottawa. There was a brief break in his RCMP service though, as loved bloomed in the North. It was Coppermine that Cyril met Martha. Legend has it that Cy met the plane that Martha was on, when she arrived up there to work at the nursing station. As luck would have it, he was immediately smitten. Since Cy was too young to marry, according to the RCMP, he left the force and moved with his new love, to Ridgeway, Ontario to join the Bertie Township Police. Then, when he reached the ripe old age of 25, he was able to re-engage into the RCMP. Cy retired from the RCMP in 1979 and became a Real Estate agent, for about a year. He wasn’t overly enamoured with that line of work, so when an opportunity arose to move to Grande Prairie and work with Proctor and Gamble’s Forestry sector, he and Martha packed up and headed west, looking forward to new jobs and at long last, closer to the Western half of the family. Cy loved working in the bush and was there for 18 years. He did several different jobs there including tree harvesting, silva culture, park maintenance, supervising tree planters and building roads. He even had a new road named after him. Fugard Road, so if you’re ever out in the bush south of Grande Prairie, keep your eyes open! After Cy and Martha both retired, they decided to move here to High River, where they’ve been ever since. In retirement, Cy was able to enjoy a good game of golf, which he thoroughly enjoyed. He became an accomplished vintner of red wine with his own bottling operation, enjoyed hitting the slopes in the Rocky Mountains for years, travelled the world with Martha, and was employed as co-babysitter in Vancouver, on numerous occasions! Cy is pre-deceased by his parents, Hazel and Harley and two brothers, Robert and Charles. Left to mourn are his wife Martha, sons Ross (Melanie) of Mill Bay, BC and Lee (Dawn) of Grande Prairie, Alberta, daughter Lynne (Andreas) of Squamish, BC. Granddaughters Avy and Elke, sister Arlein, brothers-in-law Robert McCullough of Consort, AB, Bruce McCullough (Dona) of Grande Prairie, AB and Grant McCullough (Joyce) of Didsbury, AB. Sisters-in-law, Lillian Holmes of Sedgewick, AB, Adah Fawcett (Doug) of Consort, AB and Carole Heatherington (Gordon) of Consort, AB. There are also a multitude of nieces and nephews who loved Cy. A memorial service was held at High River United Church (123 Macleod Trail) on Saturday, August 15 at 2:00 pm. In lieu of flowers, Cy would love for donations to be made to the RCMP Heritage Centre in Regina, SK (www.rcmpheritagecentre.com/). Caring for the family is Lyle Reeves Funerals of High River (403.652.4242).

Cyril &#8220;J&#8221; Fugard was born and raised in Fort Erie, Ontario. In his younger years Cyril attended Rose Seaton School and Fort Erie High School where he was a star basketball player. He also exceled as a trumpet player in the school... View Obituary & Service Information

The family of Mr. Cyril J Fugard created this Life Tributes page to make it easy to share your memories.

Cyril “J” Fugard was born and raised in Fort Erie, Ontario. In...