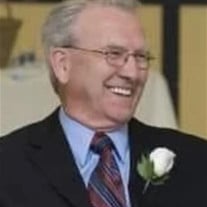 Bryan Tuck of Okotoks, Alberta passed away on March 15, 2022 at High River Hospital surrounded by his loving family at the age of 81. Bryan leaves to mourn his 3 children Gord (Kelly), Michele (Bruce), and Bryan Jr (Bro); 10 grandchildren Judy, Kim, Robin, Don, Ashley, Travis, Brett, Eric, Kyle, and Katarina; sister-in-law Phyllis Tuck, as well as numerous nieces, nephews, and great-grandkids. Bryan was predeceased by his wife Gloria; his 4 brothers Purvis, Bud (Lyle Roy), Don, and Lloyd; father Horace Tuck; and mother Emma Tuck. Bryan was raised in the Lavoy area on the Tuck Farm. The family then moved to the Edmonton area and started up Capital Auto Court Motel. Bryan joined the Air Force, and this is where he met Gloria (Soulmate). They then spent some time in Ontario, moved to Campbell River, British Columbia, then moved to Alberta. Bryan managed an A&W, did hotel work, and then worked on construction until he retired. Bryan and Gloria resided in Okotoks, Alberta until they passed. Bryan enjoyed golfing and curling, and over the last 14 years was a well-known and respected Dawgs Baseball Fan. Bryan devoted a lot of his time attending his kids, grandkids, and great-grandkids events. Memorial Donations may be made to the High River and District Health Care Foundation highriverhealthfoundation.ca (560-9th Ave S.W. High River, Alberta T1V 1B3) or to the Foothills Minor Baseball Association (Box 1194, Okotoks AB T1S 1B2). At Bryan's request, there will not be a Funeral Service. A Celebration of Life is yet to be determined. Caring for the family is Lyle Reeves Funerals of High River (Craig Snodgrass) 403.652.4242.

The family of Mr. D. Bryan Tuck created this Life Tributes page to make it easy to share your memories.