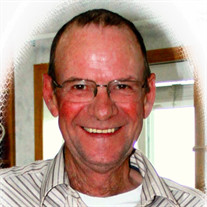 Dale Slade of Nanton, Alberta passed away on August 21, 2014 at the High River Hospital at the age of 66 years. Dale is survived by his wife, Vanessa; and sons Vance (Jeanelle) of Fort Saskatchewan , Travis (Janice) of Nanton, Warren (Doris) Ford of Okotoks and Kyel Slade of Calgary; grandchildren Jaycie Slade-Casson, Cassidy,Brooke and Jarett Slade, Brittany, Katie, and Hannah Supina, Brittany Ford, Melissa Yerxa, Lindsay and Stephanie May; brothers Cliff (Diane), Larry (Mariam), Royal Slade and sisters Darla (Dwayne) Smith and Wendy (Dave) Zuehlke. Dale was predeceased by parents John and Helen Slade of Nanton and nephew Garth Slade of Nanton. Dale was born in Calgary prior to moving to Nanton with his family at the age of 10. He graduated from high school in Nanton before attending SAIT and completing his certification as an auto mechanic. Dale worked as a mechanic in Nanton and High River and at the age of 18 began his career as a school bus driver; a career that spanned three generations of families. In July 1969, Dale married his best friend and high school sweetheart, Vanessa Tuttle. Dale and Vanessa farmed and raised their sons while Dale continued to drive bus and ran his own auto mechanic business. Dale was an active volunteer in the community as a hockey coach and served on the board of the Silver Willow Senior’s Lodge. Dale was also one of the first members of the Lancaster Society. He worked for the Livingstone Range School Division as a Transportation Coordinator for 20 years until his retirement in June of 2013. When not at work, Dale enjoyed spending time with his family, working in his garden, and following the “chucks” on the radio. Dale also loved to cook and some of his recipes have become traditional family favorites. Dale leaves behind a legacy of love and family and he will always be fondly remembered and deeply missed by all who knew him. A Celebration of Dale’s Life was held on Saturday, October 11th at 12:30 p.m. at the Nanton Community Centre. Memorial Donations can be made to the High River District Health Care Foundation, 560 - 9 Ave SW, High River AB T1V 1B3, www.highriverhealthfoundation.ca. To send condolences and view Dale’s Tribute Page please visit www.lylereeves.com . Caring for the family is Lyle Reeves Funerals of High River (Craig Snodgrass) 403.652.4242.

Dale Slade of Nanton, Alberta passed away on August 21, 2014 at the High River Hospital at the age of 66 years. Dale is survived by his wife, Vanessa; and sons Vance (Jeanelle) of Fort Saskatchewan , Travis (Janice) of Nanton, Warren (Doris)... View Obituary & Service Information

The family of Mr. Dale Roland Slade created this Life Tributes page to make it easy to share your memories.