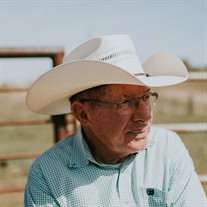 Daniel Harold Smith of Nanton, Alberta passed away at Claresholm General Hospital June 2, 2020 in his 81st year, from the rare condition of Amyloidosis. He is survived by his loving and devoted wife Serena Smith (Hay) of 56 years, son John Smith and daughter-in-law Laura Laing of Nanton, son Lloyd of Calgary, and his grandchildren Clayton (Darby) and Shelby (Shane). He is also survived by three brothers: George and (Colleen) Smith of Nanton, Edward and (Jo-Ann) Smith of Hythe, Alberta and Warren and (Aileen) Smith of Eaglesham, Alberta, sisters-in-law Sandra and (Jan) Molendyk of Three Hills and Lucille James of Wainwright. He was predeceased by his parents Fred and Gen Smith and father-in-law and mother-in-law John and Shirley Hay, as well as brother-in-law Ben James. He is also survived by aunts, uncles, nieces, nephews, and numerous close, lifelong friends and associates. Born in the Nanton Hospital, Dan grew up in Nanton, attending Nanton Consolidated School. Always a hard worker, Dan worked summer haying camps on the hills west of Nanton as a teenager, spending long days mowing the hay with a sickle, the evenings tending to and sharpening the knives on the equipment and then sleeping in tents. At the age of 15 he worked on the Nanton town water line that piped water to the town from the big spring west of Nanton. He spent a few years working for McLeod Construction and for Bruce Young at the Texaco. In 1960, Dan graduated from Olds School of Agriculture with honors. After marrying Serena in June of 1964, he worked at Firestone Tire and Rubber Plant for several years. After renting some land for 3 years, in 1971, Dan and Serena were fortunate to return home to Nanton – to their passion for ranching and farming at Dad Hays Ranch, west of Nanton, raising reputable cattle and growing feed and hay. He was keen to learn new things and keep abreast of changes in agriculture, never backing down from work that needed to be done. It was here at Smith Hay Hereford Ranches that Dan and Serena raised their sons. Although Dan and Serena moved off the ranch and into town in 2012, he remained a mentor to his son John and wife Laura who have taken the reins into the third generation of the ranch. Dan was always giving back to the community of Nanton that he loved, lived and worked. 4-H saw him serving as President and other positions, attending 4H Club week and judging showmanship and grooming at other clubs. He was a charter member of the Nanton Promoters, a 50-year member of Nanton Masonic Lodge No 17 and a member of Christ Church Vestry. Dan also served as a Waldron Grazing Co-op board member for 12 years and Secretary/Treasurer of Spruce Ranching Co-op for 23 years. Dan delighted in time spent with family and friends. He enjoyed Square Dancing with Serena – a recreational activity they participated in for 40 years. Maui was a popular holiday destination where he spent time beaching and sight-seeing. Most of all, he loved spending time with family and friends in the mountain pastures that he called home. A private family graveside service will be held at Nanton Cemetery on June 10th at 2:00 p.m. If so desired, memorial donations may be made to the charity of your choice. The Smith family would like to thank the staff at the Claresholm General Hospital for their exceptional kindness, compassion and care. Caring for the family is Lyle Reeves Funerals of High River (Craig Snodgrass) 403.652.4242.

Daniel Harold Smith of Nanton, Alberta passed away at Claresholm General Hospital June 2, 2020 in his 81st year, from the rare condition of Amyloidosis. He is survived by his loving and devoted wife Serena Smith (Hay) of 56 years, son John Smith... View Obituary & Service Information

The family of Mr. Daniel Harold Smith created this Life Tributes page to make it easy to share your memories.

Daniel Harold Smith of Nanton, Alberta passed away at Claresholm...