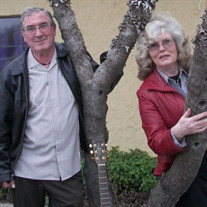 It is with great sadness that we announce the sudden passing of Daryl & Heike Schueller of High River, Alberta. Daryl and Heike were involved in a traffic accident in Tahoka, Texas on April 6, 2015 as they were on their way home from a winter holiday. Daryl & Heike are survived by their children Darylynn (Jean-Guy) Laliberte of High River and Darren (Theressa) Schueller of Austin, Texas; grandchildren Miriam, Elisabeth and John Laliberte; 5 great-grandchildren Addison, Skylar, Conner, Leila, and Hunter; Heike’s mother Anna Behne. Daryl’s siblings Janet (Allan), John (Janine), Donna (Jerry) and Myrna (Rod) along with numerous nieces, nephews, cousins and extended family members. They are predeceased by Heike’s father Heinz Stahn and stepfather Walter Behne. Daryl’s mother Marie and father Clem and his brother Gary. Daryl was born in Watson, Saskatchewan on July 17, 1942. He was the oldest of 6 children who grew up near LeRoy, Saskatchewan. Heike was an only child born in Thedinghausen, Germany on January 6, 1943. Her family immigrated to Canada when she was 10 years old and settled near Stettler, Alberta. They began their life together in 1963 and had a busy life raising two children and owning and operating several businesses throughout their life. They purchased High River Mini Storage in 1999 and settled in the community of High River to enjoy their golden years. They enjoyed travelling to Fishing Lake, Saskatchewan in the summer and to Mission, Texas in the winters. Their greatest love was making music together, right from the beginning all the way to the very end. Daryl and Heike were very passionate about an organization called Mabel’s Building Mission which helped to build homes across the Mexican border for deserving families. Also through this organization, they became involved with a scholarship program and sponsored two girls in the same family to help them get a proper education to better their lives and help the entire family. They were very proud when the oldest girl graduated from university and received her teaching degree. If you wish to make a donation in lieu of flowers or in Daryl and Heike’s name, any donations will be forwarded to this organization to continue their work and sponsorship of families in need http://www.mabelsclinic.net/ A Celebration Mass will take place on Friday, May 1st at 1:30 p.m. at St. Francis De Sales Catholic Church (206 9th Ave. W., High River). To send condolences and view the Schueller’s Tribute Page please visit www.lylereeves.com . Caring for the family is Lyle Reeves Funerals of High River (403.652.4242).

It is with great sadness that we announce the sudden passing of Daryl & Heike Schueller of High River, Alberta. Daryl and Heike were involved in a traffic accident in Tahoka, Texas on April 6, 2015 as they were on their way home from a winter... View Obituary & Service Information

The family of Daryl & Heike Schueller created this Life Tributes page to make it easy to share your memories.

It is with great sadness that we announce the sudden passing...