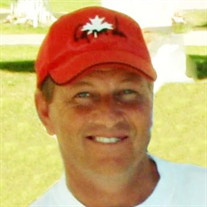 Dave Gregory of High River, Alberta passed away peacefully at home, at the age of 58, with his wife, kitties, and special friend , Leah (Treats) Collins (Langenhoff) at his side on October 2, 2019 after a courageous battle with cancer. Dave is survived by his devoted wife and soul mate, Julie Allan. He was a cherished and devoted Dad to his 2 fur babies, Charlie and Jimmy. He also leaves to mourn his loss, his Mom, Betty Gregory; brother’s Don, Gary (Lisa), sister’s Karen, Lonnie (Ron); sisters-in-law; Debbie (Craig), Cindy (Garnet) brothers-in-law; Don (Lana), Randy (Faye), Scott (Laurie), Steve. He will also be fondly remembered by many aunts, uncles, nieces, nephews, greats, cousins, and friends. He was predeceased by his Dad, Gordon “Demps” Gregory in June 2014 and most recently his father-in-law, Ron Allan just prior to his own passing, as well as numerous relatives. Dave was born and raised in Calgary, AB where he graduated from James Fowler High School. He attended SAIT, where he received his Business Diploma and Canadian Securities. Shortly after he worked in Vancouver, BC, then returned to Alberta to pursue sales. Dave met the love of his life, Julie Allan in 1989. They moved to Canmore followed by Kelowna, BC in 1993 where he worked for the City of Kelowna Cemetery and later for Comcheq. They returned to High River in 2000 to lease and operate the Rio Vista Golf Course until it flooded in 2005 and closed shortly after. In 2003 he also contracted his services to Alberta Water Resources until his passing. Dave was a reliable hard worker, dedicated hockey player with the Schmidt Bros. Hockey Team and deserved his title of “Slick Schmidt” #19. An avid golfer and a great cook. After Dave’s Dad passed, he kept his promise to his Dad to keep a watch over his Mom, Betty where she resided next door. He was very well respected in the neighborhood, a man of integrity, and very helpful to others. He had a great sense of humour and entertained us with tales of him and his buddies growing up. He had so much patience, spending time with each and every one of his nieces and nephews making them feel special by taking the time to go with them on bike rides, hiking, golfing and sharing “his” important lessons in life. Dave I’m pretty sure if the fight for your life had a fair ref you would have won your battle hands down! Sadly, we all know life isn’t always fair. You fought valiantly right to the bitter end! You had so many close family and friends in your corner Dave... routing for your win. Maybe in the end it was your Dad, nephew Tanner and all the other angels waiting for you, who won. You will be dearly missed and forever loved. A Celebration of Dave’s Life took place on Friday, October 18, 2019 at 2:00 p.m. at the Wales Theatre, 421 - 1st St. SW, High River. Please dress casual - blue jeans are encouraged. Caring for the family is Lyle Reeves Funerals of High River (Craig Snodgrass) 403.652.4242. In lieu of flowers, memorial donations may be made to the Heaven Can Wait Animal Rescue Foundation, www.heavencanwait.ca; Box 6131, Station Main, High River, AB T1V 1P7 or The Mustard Seed, [email protected]; 102-11 Ave SE, Calgary, AB T2G 0X5

Dave Gregory of High River, Alberta passed away peacefully at home, at the age of 58, with his wife, kitties, and special friend , Leah (Treats) Collins (Langenhoff) at his side on October 2, 2019 after a courageous battle with cancer. Dave... View Obituary & Service Information

The family of Mr. David Gordon Gregory created this Life Tributes page to make it easy to share your memories.

Dave Gregory of High River, Alberta passed away peacefully at...