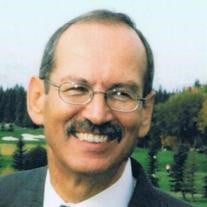 It is with great sadness that we announce the death of David Harris. He survived for six and a half years after being diagnosed with carcinoid syndrome. David was born in the High River hospital and raised in the beautiful countryside West of Turner Valley. After completing high school, David moved to Calgary to find work. In 1964 David enrolled in the University of Calgary and graduated with a Bachelor of Commerce degree. He then continued his studies to earn his Certified General Accountants designation. David worked for many years for Gulf Canada Resources, and on early retirement joined a group of friends who were starting a junior oil and gas company. David was an avid curler and late in life fell in love with the game of golf, both of which he pursued with enthusiasm at the Glencoe Club. When his children were young, he spent many happy hours coaching hockey, ringette and soccer for Elbow Park community teams. Building our lakeside cabin at the Shuswap was a special project of Dave’s and he spent many happy summers there with his family and friends. He was always puttering on various construction projects and occasionally ventured onto the lake in his yellow canoe, fishing rod in hand, David was predeceased by his father, Howard Lindsay Harris, and his mother, Jane Mary (Denning) Harris. He leaves to mourn him his beloved wife of 49 years, Emma, his daughter Julie Laureen Harris (Jerald Fast), his son Neil David Harris (Margot) and his much loved granddaughters Elizabeth Nell Fast and Rachel Marie Fast. He is also survived by his sister Mary Schlichting, brothers Lorne and Gordon, and his sister Carol Hodges as well as many dear aunts, uncles, nieces and nephews. The family would like to thank Dr. Haggblad, Dr. J. Pasieka, Dr. E. Dixon, Dr. G. Schnell and nurse Andrea Thomber for their wonderful help on David’s journey through his illness. David’s last days were spent at Rosedale Hospice where he received loving care, keeping him comfortable to the end. He passed away surrounded by Emma, Julie and Neil. If friends so desire, in lieu of flowers, we request donations be made in David’s name to Rosedale Hospice, 920 – 7A Street N.W. Calgary, AB T2M 3J3. A Memorial Service was held on Wednesday, September 12th at 2:00 p.m. at the Grace Presbyterian Church in Calgary (1009 – 15th Ave. SW). To send condolences and view David’s Tribute Page please visit www.lylereeves.com . Caring for the family is Lyle Reeves Funerals of High River, Craig Snodgrass (403.652.4242).

It is with great sadness that we announce the death of David Harris. He survived for six and a half years after being diagnosed with carcinoid syndrome. David was born in the High River hospital and raised in the beautiful countryside West... View Obituary & Service Information

The family of Mr. David H. Harris created this Life Tributes page to make it easy to share your memories.

It is with great sadness that we announce the death of David...