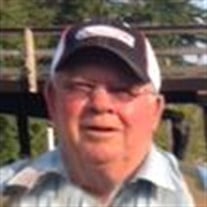 It is with heavy hearts; the family of Dennis Peterson is saddened to announce his passing on Thursday, July 19, at the age of 76. Dennis was born in Winnipeg, Manitoba on March 26, 1942, to Roy and Jessie Peterson. He was the eldest of 6 children. While still a young boy; his parents left Manitoba and moved to Assiniboia, Saskatchewan to help Dennis’ grandparents farm. As a youth, Dennis was fortunate to enjoy rural living and would carry his love for the land throughout his life. Upon completion of school, Dennis obtained his automotive mechanic’s license and worked in the area before moving to Alberta in 1973. After relocating his young family to High River, Dennis was employed at various agricultural dealerships in the area and earned his heavy duty mechanic certification. He was involved with bringing John Deere to High River, and jointly operated the dealership from 1979 through 1987. In 1999, Dennis opened Peterson Mechanical in Nanton which soon became a partnership with his son Wayne, where he remained actively involved until his passing. It was normal coffee time at Peterson Mechanical to see several extra faces, swapping experiences and sharing some laughs. Dennis enjoyed fishing on the west coast, returning to Saskatchewan each Fall to help his family harvest, family gatherings, and the many friendships he made throughout the years. He willingly shared his wisdom and knowledge to help others. Dennis’ pride and joy was his family. He will be dearly missed by his life partner Doreen Braaten; his sons: Randy (Sarah) and Wayne (Patti); grandchildren Jesse (Shvonne), Jamie, Braden and Amy; great grandson Braxton; Doreen’s children Lana (Don) Allan and Jodie Braaten (Peter); grandchildren Kimberly, Tyrel and Samantha Allan; his brothers Dale (Linda) and John (Betty), and sister Penny. He was predeceased by brother Melvin and sister Barb. As per Dennis’ request, no service will be held at this time. Interment will take place in Saskatchewan at a later date. Memorial Donations can be made to the High River District Hospital Foundation, www.highriverhealthfoundation.ca or STARS, www.stars.ca To send condolences and view Dennis’ Tribute Page please visit www.lylereeves.com . Caring for the family is Lyle Reeves Funerals of High River (Craig Snodgrass) 403.652.4242.

It is with heavy hearts; the family of Dennis Peterson is saddened to announce his passing on Thursday, July 19, at the age of 76. Dennis was born in Winnipeg, Manitoba on March 26, 1942, to Roy and Jessie Peterson. He was the eldest of 6 children.... View Obituary & Service Information

The family of Mr. Dennis Loring Peterson created this Life Tributes page to make it easy to share your memories.

It is with heavy hearts; the family of Dennis Peterson is saddened...