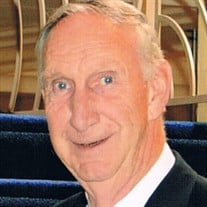 Dohnavur (Don) Royal Young of Okotoks, Alberta passed away at the age of 79 on May 23, 2020. Don is survived by his loving wife Doreen, his sons Jeffrey (Leah) and Randall (Sasha), his daughter Jane (Russell), and nine grandchildren, Chloe, Lucy, Bennett, Patrick, Katherine, Michael, Macy, Miles, and Madden. Don was predeceased by his father Earl and mother Mary Ann, siblings Beatrice, Elwood, Vincent, Aaron and Joe, and brothers-in-law Donald Anderson and Jerry Anderson. He is survived by his siblings Stirling (Thelma) Young and Thelma (George) Corris and sisters-in-law Linda Anderson and Janice (Steve) McGovern, and many nieces and nephews. Don was born in Craigmyle, Alberta on September 28, 1940 and married Doreen in Calgary on October 26, 1963. He often joked that she was the best he could do with the car he had at the time, and that he had a very nice car! In his earlier years Don worked on road construction, went from wash boy to service manager at Henninger Ford, owned and operated a Texaco service station in Calgary which was one of the first U-Haul franchises in western Canada, and became a successful real estate agent. In 1978, he moved his family to the Blackie area to farm with his father-in-law Len Anderson and brother-in-law Donald Anderson. Don and Doreen moved to Okotoks in 2010, but he continued to be involved in farming and used his mechanical skills on equipment and vehicles in the quonset. Along with a strong work ethic and willingness to learn, Don was known by all for his kindness, humour, and generous heart. He eagerly helped those in need, whether it be financially or by imparting his wisdom and experience. He wanted to bless others as the Lord had blessed him. He was intentional about making memories with his family and friends. He often had a "neat idea" that involved a fun vacation, going for ice cream, or just getting together for a cup of coffee. Don had a deep commitment to his family, friends, and his Christian faith. He was a valuable member of the church community. While our hearts mourn the loss of our beloved husband, father, grandfather, brother, and uncle, we know that he is now in the presence of his heavenly Father. In lieu of flowers, donations can be made to The Calgary Dream Centre or Samaritans Purse in memory of Don Young. The family also encourages you to intentionally bless someone as Don would have done. A private family graveside burial will occur at the Blackie Cemetery with a public celebration of life to be scheduled at a later date. Caring for the family is Lyle Reeves Funerals of High River (Craig Snodgrass) 403.652.4242.

Dohnavur (Don) Royal Young of Okotoks, Alberta passed away at the age of 79 on May 23, 2020. Don is survived by his loving wife Doreen, his sons Jeffrey (Leah) and Randall (Sasha), his daughter Jane (Russell), and nine grandchildren, Chloe,... View Obituary & Service Information

The family of Mr. Dohnavur "Don" Royal Young created this Life Tributes page to make it easy to share your memories.

Dohnavur (Don) Royal Young of Okotoks, Alberta passed away at...