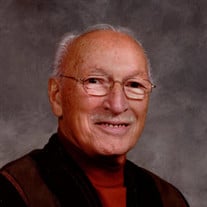 Don Abel of High River, AB passed away on May 10, 2018 at the High River Hospital at the age of 95 years. Don is survived by his wife Joanne; children, Alan (Theresa), Dona Blaney (Moe Guevin), Vivian (Gary) Jones, Loreen (Colin) MacIsaac, Ron (Holly); 12 grandchildren, 13 great-grandchildren. Don is also survived by Joanne’s children; Patricia McLarnon, Gerald and Stephen MacInnis. Don was predeceased by his loving first wife Marion, as well as one sister Hazel and four brothers Rankin, Laurence, George and Sid. Don was born in Melville, Saskatchewan where he spent a majority of his life. He was called to serve his country during World War II. During Don’s war training he was selected to attend Sandhurst Military College in southern England where he graduated as full lieutenant. Don made many close friends during his service to our country and remained a legion member. He was so proud to be a Canadian. He was a very successful businessman in Melville owning and operating Abel’s Cartage until he retired and sold the business in 1978. Don was very involved in his community. He played and coached the Melville Millionaires hockey team. He was a great mentor and coach with hockey at the heart of the Abel name. Don also served as the Mayor of Melville for four terms. As a result of his dedication to public service, he was appointed to Saskatchewan government boards for a number of years. He served as President of the Saskatchewan Urban Municipal Association for two years. Don and Joanne have lived happily in High River for the past 24 years where they enjoyed golfing and curling and made many friendships. Don will forever be remembered for his eternal optimism, love for family and his passion for life. A true leader and inspiration to us all. A Memorial Service was held on Thursday, May 17, 2018 at 2:00 p.m. at the High River United Church, 123 Macleod Trail SW, High River, AB. A reception will be held after the service in the church foyer. In lieu of flowers, memorial donations can be made to the Canadian Blood Services (www.blood.ca) and the High River District Health Care Foundation (highriverhealthfoundation.ca) To send condolences and view Don’s Tribute Page please visit www.lylereeves.com. Caring for the family is Lyle Reeves Funerals of High River (Craig Snodgrass) 403.652.4242.

The family of Mr. Donald Alfred Abel created this Life Tributes page to make it easy to share your memories.