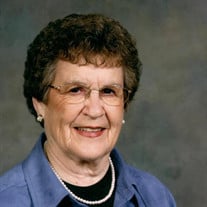 Born Donna Lea Denison to Ione Taylor and Denny Denison on Aug 8, 1930 at Rouleau, Saskatchewan. Died at Foothills Country Hospice, Okotoks, Alberta on July 28, 2020 at the age of 89 years. Donnas’ goal was to live to 90 years which would have been August 8th so her family are saying she made it. Donna was the youngest of three girls, with sisters Patricia and Dorothy. Her mother Ione was a school teacher and her father Denny, an elevator agent. They lived in Saskatchewan until as a teenager she moved, with her parents, to Cayley, Alberta. Donna met Lloyd Loree while living in Nanton finishing school. She went on to train to be a Laboratory Technologist then moved to Wainright to work. Donna and Lloyd were married in 1951. They farmed north of Nanton and raised their 5 children there. Donna and Lloyd loved to sing and entertain. They both were part of the United Church Choir and the Nanton Curling Club. They moved in to Nanton in 1979. Donna was predeceased by Lloyd in October 1981. Donna married Denny Dunn in August 1986 and the family grew with the addition of Dennys’ three children. Donna and Denny were very involved in square dancing and danced in the 1988 Olympic Opening Ceremonies in Calgary. She was predeceased by Denny in June 2000. Donna was always very involved in the community including Meals on Wheels, Nanton UCW, Red Hatters, Nanton United Church Choir, the Regional Choir as well as Chinook Players. She was always there to help with lunches and teas. She was an avid sewer, loved to dance, play cards, and was well known for her lipstick, earrings with matching necklaces, perfect nails, and high heels. She was predeceased by Lloyd Loree, Denny Dunn, Denny Loree, Blake and Tyler Peck, her parents Denny and Ione, her sisters Pat and Jack Devine, Dot and Ken Phillips, and her in-laws, Kate Loree, Gerald and Jane Loree, and Bert Loree. Donna is survived by her children - Grant (Wendy), Murray (Deb), Brenda (Dave), Catherine (Dean), Maureen (Lew), Jennifer (Steve), Hugh, and Dennys’ widow Joan. 16 Grandchildren – Mackenzie, Justin, Brett, Amanda, Dayne, Jocelyn, Landon, Alyssia, Madison, Shae-Lyn, Jody, Tyson, Rachelle, Tara, Emma, and Ellie. 7 Great grandchildren – Sawyer, Sophia, Jaxson, Brenna, Kasen, Everly and Reiss. She is also survived by numerous nieces and nephews. In lieu of flowers, donations can be made to Silver Willow Lodge, Nanton or Foothills Country Hospice in Okotoks both of whom took such good care of her. A Private Family Graveside Service will be held. Caring for the family is Lyle Reeves Funerals of High River (Craig Snodgrass) 403.652.4242.

Born Donna Lea Denison to Ione Taylor and Denny Denison on Aug 8, 1930 at Rouleau, Saskatchewan. Died at Foothills Country Hospice, Okotoks, Alberta on July 28, 2020 at the age of 89 years. Donnas&#8217; goal was to live to 90 years which would... View Obituary & Service Information

The family of Mrs. Donna Lea Dunn created this Life Tributes page to make it easy to share your memories.