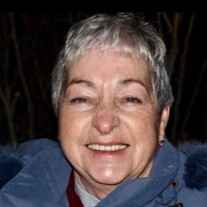 Mrs. Donna Warnica of High River, Alberta passed away peacefully at the High River Hospital on April 26, 2021 at the age of 77 years. Donna is survived by her loving husband Barry; daughter Lynette (Murray); son Gary (aka: Jamie); sister Nevone; brothers George and Gordon; grandchildren Jaden, Braxton, Shae-Lyn and Maisie. Donna was predeceased by her parents Irvin and Ella Meggison. Donna was born in Deloraine, Manitoba on December 12, 1943. Donna grew up on a farm near Goodlands, Manitoba with her sister, 2 brothers and 3 cousins. She met Barry in 1963 through family friends and they began dating. Donna attended Nursing Training at Misericordia General Hospital in Winnipeg, Manitoba. She graduated April 21, 1965. Barry and Donna were married in Goodlands United Church on June 12, 1965. They lived on the Warnica family farm near Miami, Manitoba from 1965-1977. During this time Barry and Donna had 2 chosen children, Lynette Dawn and Gary James. Donna’s nursing career took her from Morden, Manitoba to Taber, AB, Lethbridge, AB, High River, AB and Black Diamond, AB. She retired at 72 years of age. She truly enjoyed taking care of others and she was loved by all who knew her. Donna’s hobbies include spoiling her grandkids, traveling, taking care of her home, beautiful flowers, vegetable garden and most importantly caring for her family and friends. Memorial donations may be made to the Alberta Cancer Foundation – www.albertacancer.ca . A private family service will be held on Monday, May 3 at 2:00 p.m. with Live Stream available on Donna’s Tribute Page at www.lylereeves.com . Caring for the family is Lyle Reeves Funerals of High River (Craig Snodgrass) 403.652.4242.

The family of Mrs. Donna Ann Warnica created this Life Tributes page to make it easy to share your memories.