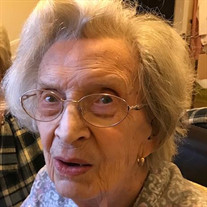 Mrs. Dorothy Louise Monro (Armstrong-Adams) passed away in High River, Alberta on November 15, 2017, at the age of 101. She was born in Saskatoon, Saskatchewan on November 9, 1916 and lived in Port Arthur, Ontario before moving to Winnipeg, where she graduated from Kelvin High School and went on to Dominion Business College. She moved to The Pas, Manitoba with her mother and step-father in 1942. She first started working with the Manitoba Government in the old Courthouse Building on Fischer and 3rd, in the Fish and Game Department. The year 1944 was traumatic for Dorothy as her step-father died, her mother had a stroke and her only sibling, brother Sidney, was killed in the war. That same year, she married William Mackenzie (Mac) Monro. They had a family of two daughters, Margaret and Barbara Ann. After the girls were in school, Dorothy went back to work with the government in the Mines Branch. She continued to work with the Manitoba Mines Branch for about 40 years. Mac died in 1995 and Dorothy continued to be independent and active for many years. She was an involved member of the United Church and a lifelong member of the Order of the Eastern Star in the Pas. Dorothy moved to High River, Alberta in 2003. Family and friends were very important to Dorothy. She was a wonderful letter writer and kept touch with childhood friends, relatives and especially, her grand-children. She loved to be outside for picnics, drives in the country and in the lovely sunshine. Dorothy loved animals and in particular, dogs. She and Mac always had a pet in the house. Dorothy is survived by her daughters, Margaret (Bob) Orr of Pomona, California and Barb (Rob) Parker, of High River, Alberta. She has left a legacy of seven grandchildren and twenty-four great grandchildren. She was always content and thankful for all that life brought her. Dorothy did not wish to have a funeral service but she was a kind, considerate unassuming person who touched the lives of many people in her century of life. To send condolences and view Dorothy’s Tribute Page please visit www.lylereeves.com . Caring for the family is Lyle Reeves Funerals of High River (Craig Snodgrass) 403.652.4242.

Mrs. Dorothy Louise Monro (Armstrong-Adams) passed away in High River, Alberta on November 15, 2017, at the age of 101. She was born in Saskatoon, Saskatchewan on November 9, 1916 and lived in Port Arthur, Ontario before moving to Winnipeg,... View Obituary & Service Information

The family of Mrs. Dorothy Louise Monro created this Life Tributes page to make it easy to share your memories.