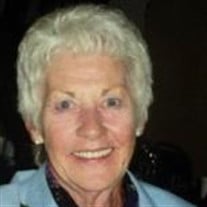 Mrs. Dorothy Rowley of High River, Alberta passed away at the High River Hospital on January 28, 2020 at the age of 76 years. Dorothy is survived by her loving husband Bill; children Clinton (Sandi) Rowley, William Rowley, Nancy (Howard) Brososky, and Laura Matthews, 16 grandchildren; Chris (Ali) Rowley, Lisa (Rylan) Siggelkow, Melany (JC) Connor; Anthony, Nick, Matt, and Jaden Rowley; Ethan (Shallyn) Brososky, Amy (Travis) Rhoads, Angi, Will, Michael, and Tanner Brososky; Jim Rowley, Ben and Teresa Matthews, and 9 great grandchildren; Kierra, Jude and Isabel Siggelkow; Corbin and Josh Connor; Niall and Kian Brososky; Felicity Rowley, and Hugh Rowley. She also leaves behind 6 siblings; Hugh, Molly, Elizabeth, Bill, Bob, and Ruby. Dorothy is predeceased by one infant son, Donald Hugh Rowley (1963), and 2 sisters; Catherine and Nellie. Dorothy was born to Hugh and Glenis Downey and raised in Turner Valley, Alberta, where she later met her husband Bill. They married in 1961 and made their home in several communities throughout Alberta over their 58 years together, raising their children primarily on a farm near Eckville. Eventually they made their way back to Black Diamond and finally High River. Dorothy’s first and greatest love was for her Lord and Savior Jesus Christ. She was baptized as a young adult at Black Diamond Gospel Chapel where she and Bill later got married and became members. Dorothy was always excited for an opportunity to share her love of God with others. She spoke truth and expected truth to be spoken to her, even the hard stuff. She valued time spent with her family, going for walks, playing scrabble, and serving others. Dorothy often said that her hope for people’s remembrance of her life would be one that would cause them to think of Jesus. In lieu of flowers memorial donations may be made to the High River & District Hospital Foundation (Palliative Care) www.highriverhealthfoundation.ca , Southern Alberta Bible Camp – Box 99 Lomond Alberta, T0L1G0 www.sabc.ca or other preferred Christ centered mission or charity. A Private Family Service was held. Caring for the family is Lyle Reeves Funerals of High River (Craig Snodgrass) 403.652.4242.

The family of Mrs. Dorothy Jean Rowley created this Life Tributes page to make it easy to share your memories.

Mrs. Dorothy Rowley of High River, Alberta passed away at the...