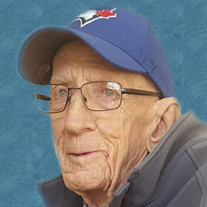 Douglas (Doug) Leo Valgardson, fondly known as "Grampa Geezer" or "Trouble" passed away peacefully at the High River Hospital on August 3rd, 2016 after a short illness. Doug was born October 8, 1930 in Taber, Alberta to John Peter and Vigdis Valgardson. A proud son of Icelandic immigrants, Doug and his 5 siblings grew up on the home farm at Taber. Doug met his wife Phyllis at a dance in Taber and they were married October 18, 1952. They had 4 children: Karyle, Colin, Chris and Sandra, and cared for Phyllis's siblings, Richard, Shirley, and Marjorie. Doug graduated from SAIT with his Auto Body certificate and went on to pursue a career in the oil patch that took the family across much of Western Canada. The family later returned to the farm in Taber, where Doug owned and operated "Doug's Auto Body," and eventually they made High River their home in 1972. Doug worked for Central Motors in High River and then opened "Spitzee Auto Body," which operated from 1976 - 1994. After Phyllis passed away, Doug retired in High River and continued to be active in the community, especially as a member of the Friendship Centre where he was President for 2 terms. Doug was well known for his friendly disposition, funny sayings, and for being "everybody's Grampa." He also had a love for Disney and Mickey Mouse, and this passion was shared with his children and grandchildren. Doug is predeceased by his wife Phyllis, father and mother John Peter and Vigdis Valgardson, siblings Tilde Valgardson, Marvin Valgardson and Ralph Valgardson, brothers- in-law Richard White and Richard Sanderson, and granddaughter Krista. Doug is survived by his children Karyle (Bill) Young, Colin (Dana) Valgardson, Chris (Lynn)Valgardson, and Sandra Valgardson, siblings Arlene (Ed)Flickinger, and Arnie (Dorothy)Valgardson, sisters-in-law Shirley (Bill) Marshall, Deb Sanderson, Marjorie White, Theresa Valgardson and Christina Valgardson, grandchildren Natasha (Reid) Habing, Amanda (Roger) Young, Matthew (Christa)Valgardson, Glenn Valgardson, Kaylee (Greg) Bellegarde, James Reil, Caitland (Spencer) Asmundson, Paige (Josh) Valgardson, and Mikaela Valgardson, great-grandchildren Austin, Kieran, and Jenna Habing, and Sisika, Aiyannah and Odina Bellegarde, as well as numerous nieces, nephews, cousins and extended family and friends. The family wishes to thank the staff at the High River Hospital for providing care to Doug in his last days. Doug will be laid to rest during a private family burial at the Highwood Cemetery. Friends and family celebrated Doug's life Saturday August 6 at the High River Friendship Centre. In lieu of flowers, donations can be made in Doug's name to the High River Food Bank or the ALS Society of Alberta.

The family of Mr. Douglas Valgardson created this Life Tributes page to make it easy to share your memories.