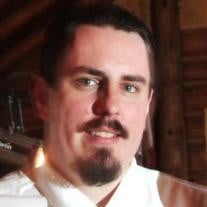 Dustin James Bennett born December 17, 1976, passed away December 11th, 2011, 6 days before his birthday, in Calgary, Alberta, Canada. He slipped away after repeated attempts by the hospital staff to resuscitate him. He had a saddle pulmonary embolism, which was the result of a blood clot in his leg that formed after a slip and fall accident. The blood clot moved from his leg to his lungs, where it blocked both main arteries to his lungs. He will be cremated and taken back to Sacramento, California. His eyes have been donated, to help 6 other people, to save their sight. We believe that Dustin would have wanted to help others in this way. A Celebration of Dustin's Life was held in High River, Alberta, Canada at Carlson’s On Macleod on Tuesday, December 20, 2011. This celebration of his life will be streamed live, at www.lylereeves.com and will remain on that site thereafter if you wish to watch. Dustin’s father and his family will also be holding another service for him in California on January 14, 2012, in the home of Carl and Mavis Apted (who were like his “adopted” parents), in Citrus Heights. Dustin was born December 17, 1976 in Sacramento, the state capitol of California, and lived most of his life within thirty miles of it. Dustin was an average student, that didn’t know what his gifts were until he found computers. He then became an extraordinarily gifted computer technician. He also loved to play guitar. Dustin’s Uncle Dave, who is a musician, taught him how to play. Dustin also heroically saved the life of his stepbrother, Ryan, when they were at the lake. They had got a ride out to an island in a lake and then got left there. Dustin could swim, Ryan could not, so Ryan got on Dustin's shoulders and Dustin proceeded to try and walk back across the water. It was deep enough that it was over Dustin’s head and Ryan kept climbing up higher onto his shoulders. This was just another example of Dustin’s fine character. He had great compassion for others, loved deeply, could easily empathize with others, and was the kind of a friend that was always there when he was needed. He was the kind of person who would give you anything that he could; he could make you laugh when you were sad, he always had a kind word and was a tremendous support to all who knew him. Dustin was the “son” of every mother of his good friends and the “uncle” of all of the children he knew. Dustin married Jessica Carolyn Jones on July 20, 2002, at Carl and Mavis Apted’s home. Dustin then became an outstanding father to 3 beautiful children, Jacob Allen (born Nov 21, 2002), Krystal Marie (born Mar 9, 2005) and Lily Anne (Nov 30, 2006). Dustin’s children were his greatest source of pride and accomplishment. Dustin and Jessica separated in June of 2008. Jessica and the kids moved to Las Vegas, NV in March 2010. Dustin was very conscientious of keeping contact with his children, and called them on a weekly basis. He loved his children very much, and talked about them all the time. Last year Dustin moved to Brant, Alberta, Canada (an hour south of Calgary, an hour north of Lethbridge), to live with his sister Charis on her farm. When Charis’ favorite horse died on her birthday, Dustin thoughtfully cut off part of the horse’s mane and fashioned a keepsake out of it, which Charis treasures, another example of his great empathy. Soon after moving to Canada, Dustin met and fell in love with a beautiful woman, Diane Renfree. They were together for over a year. They planned on getting married someday. She is one of Charis’ best friends, and has been for years. Diane is, and will forever remain, a close friend of this family. His loving grandparents Marie and John Bennett and Nell Weidenhamer preceded Dustin in death. He is survived by his 3 children, Jacob, Crystal, and Lily Bennett, of Las Vegas, NV, his children’s mother Jessica Bennett of Las Vegas, NV, his father Jerry Bennett of Alderpoint, CA, his mother Judy Parks of Great Falls, MT, his sister Charis Hervey and her husband Ken Hervey of Brant, Alberta & their children Cody, Holly, Brian, John, and Lucas, his sister Christy Potts and her husband James Potts of Lincoln, California, his loving companion, Diane Renfree of Okotoks, AB, his Grandparents Dr.’s Robert and Linda Weidenhamer of Falls Village, Connecticut, his Uncle David and Aunt Paula Weidenhamer, of Orangevale, CA, his Uncle Marvin and Aunt Sally of Tega Cay, SC, his Great Aunt Phyllis Heim of Carmichael, CA, his Great Uncle Manuel Himenes of Sacramento, CA, and his many, many cousins.

Dustin James Bennett born December 17, 1976, passed away December 11th, 2011, 6 days before his birthday, in Calgary, Alberta, Canada. He slipped away after repeated attempts by the hospital staff to resuscitate him. He had a saddle pulmonary... View Obituary & Service Information

The family of Mr. Dustin J. Bennett created this Life Tributes page to make it easy to share your memories.