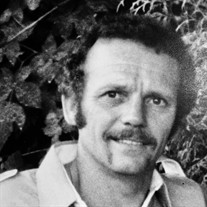 Eberhard (Eby) Reisinger passed away peacefully in High River, Alberta on Wednesday, August 2nd, 2017 at the age of 78 years. Born in Frauendorf, Germany on the 29th of September, 1938, he made out for a new life abroad at an early age and immigrated to Canada in 1956. There he began his life path as a hardworking and steadfast ironworker, where he traveled throughout British Columbia while supporting his family at home in Abbotsford, BC. A proud member of the local 97 Ironworkers Union (Van, BC), his work ethic and commitment to his trade are attributes he was admired for and carried with him throughout his life. Notable accomplishments in this field include Canada Place and GM Place (Van, BC) and SafeCo Field and the Seahawks Stadium (Seattle, WA), of which he was proud to be a key player in their creation. Outside of work, Eby was a proud hockey dad, and could often be found supporting his two boys at their various games. He was also a lifetime loyal fan of his "hometown" hockey team, the Vancouver Canucks, as well as the best football team around - the nearby Seattle Seahawks. Upon retirement, Eby learned how to slow down and enjoy his down time... Pastimes included golfing at the local links, reading many a good book, and regular morning walks and coffee with his buddies. But beyond all else, he was happiest sporting his sunnies, a bottle of Maui Babe, and chilling near the water - be it a lake or the ocean - he loved life beach-side. Eby is survived by his wife Anne (Anna); sons Jason (Aubrey) and Garren (Chantel); and his much loved grandchildren Fallon, Camdyn, Max and Sloan. He will be greatly missed by all who knew him.... We love you Opa! Ironworker “All around our nations spans; monuments built by human hands. Bridges, towers and buildings too; by men who work for me and you. Men with strong and calloused hands; who toil all day upon our lands. They work in weather dark and dreary; when day is done they come home weary. They work in hottest heat of day; and earn every bit of their weekly pay. They work in mud and sleet and snow; and go where others dare not go. They work up high and with each other; and that is why they’re called “brother”. They climb where angels fear to tread; they never look down in fear or dread. So don’t wait till the bye and by to say a prayer; to the one on high for men on whom we are rely. Bless the Ironworker in the sky.” At Eby’s request no services will be held and his ashes will be interred in Australia and New Zealand. To send condolences and view Eby’s Tribute Page please visit www.lylereeves.com . Caring for the family is Lyle Reeves Funerals of High River (Craig Snodgrass) 403.652.4242.

Eberhard (Eby) Reisinger passed away peacefully in High River, Alberta on Wednesday, August 2nd, 2017 at the age of 78 years. Born in Frauendorf, Germany on the 29th of September, 1938, he made out for a new life abroad at an early age and... View Obituary & Service Information

The family of Mr. Eberhard Reisinger created this Life Tributes page to make it easy to share your memories.