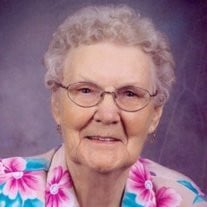 Edna May Norman passed away very peacefully and without pain, after a very brief illness in the High River Hospital on September 27, 2013, at the age of 93. Edna is survived by her four children: Shirley (Dale) Brown, Harvey (Margaret) McLachlan, Lea Norman, Garry (Naomi) Norman. Edna is also survived by 11 Grandchildren – Gordon, Mavis (Jamie), Cindy (Terry), Norman (Danae), Marilyn, Michele (Stu), Bryan (Connie), Christy (Elgin), Cameron, Elliot and Lance; 14 Great Grandchildren: Kael, Emily, Spencer, Samantha, Shawna, Dustin, Marla, Gabriel, Kyla, Joshua, Stuart, Shawn, Jason, Michael and 2 Great Great Grandchildren - Liam & Olivia. She also leaves 4 Blended family Great Grandchildren and 11 Great Great Grandchildren, Sisters-in-law, Edna, Mary & Vi and many beloved nieces and nephews. She is also survived by many very good friends who will all miss her dearly. Edna was born on February 17, 1920 near Fairview Alberta in the beautiful Peace River Country of Alberta to William “Will” and Amy Parliament. Edna was predeceased by her parents William & Amy Parliament, her sisters Mary(Howard) Stirling, Dorothy (Frank) McLachlan, her brother Ernie (Beulah) Parliament, her husband of 62 years, Sanford “Ford” Norman, and many Sisters & Brothers-in-law, nieces and nephews. Edna lived the first 52 years of her life in the Peace River country in Fairview, Peace River and McLennan always surrounded with a lot of family and friends doing a myriad of interesting things and as many hobbies as she had time for. In 1972 she moved to Nanton with her husband “Ford” who was transferred here as the Liquor Store Manager. Upon Ford’s retirement they chose to remain in Nanton as they loved riding the range on the ranches of many of the friends that they had made here. After Ford retired they began doing a lot of travelling and visited many places all across Canada and the US, including Hawaii. Edna then also was able to spend even more time doing her favourite hobbies of knitting and crocheting. We have lost count years ago of how many sweaters and afghans she made for her children, grandchildren and even great grandchildren over the years. Edna was always very active in the Communities in which she lived. For her entire life she was a faithful member of the Anglican Church of Canada and while actively involved within her church in each of the communities in which she lived, she was also active in the church related organizations: Women’s Auxilliary, Anglican Church Women, Chiro Club and sang in the Choir. She was also involved at the Diocesan level of the Anglican Church of Canada and held different positions there as well. Edna was a born leader so was always President, Treasurer or Secretary of any group she belong to. These groups included The Womens Institute; and in Nanton, the Trailer Club, which included many camping trips with a lot of friends; The Old Timers Association; and the Silver Willow Lodge Seniors Association. She was a ‘career’ volunteer and did lots of that in Fairview, Peace River, McLennan and Nanton. In Nanton, she was a long time volunteer at the local Air Museum, which is now named Bomber Command Museum of Canada and even though moving into the Silver Willow Lodge at age 77, she faithfully did the dishes after every meal to assist the kitchen staff there until about four years ago when it became difficult for her to stand. Even up to the day she was taken to the High River Hospital, she participated in every single activity (well maybe except Bingo) that the Lodge has available to its Residents. Edna had such a positive influence on everyone she met and her sense of humour was fantastic. She will be missed by all of her family and friends but we can’t wish her back as she is now with all of her loved ones that passed before her. She will always remain with us in spirit. A Memorial Service took place on Saturday, October 5th at 1:00 p.m. at the Nanton Christ Church Anglican. To send condolences and view Edna’s Tribute Page please visit www.lylereeves.com . Caring for the family is Lyle Reeves Funerals of High River (Craig Snodgrass) 403.652.4242.

Edna May Norman passed away very peacefully and without pain, after a very brief illness in the High River Hospital on September 27, 2013, at the age of 93. Edna is survived by her four children: Shirley (Dale) Brown, Harvey (Margaret) McLachlan,... View Obituary & Service Information

The family of Mrs. Edna May Norman created this Life Tributes page to make it easy to share your memories.

Edna May Norman passed away very peacefully and without pain,...