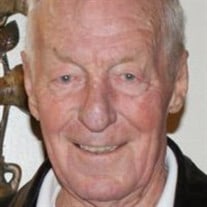 Edward (Ted) Myles Hurl passed away peacefully in the early morning hours of August 9th in the High River Hospital, days away from his 92nd birthday. Ted is survived by his daughter-in-law Linda Hurl, daughter Leslie & her husband Jim Fitzgerald, son Doug & his wife Lisa Hurl, son-in-law Ken Patterson; and his grandchildren Lawna Hurl & her husband Glen Gerlat, Troy & his wife Jodi Hurl, Sandra & her husband Joss Elford, Duncan & his wife Lisa Fitzgerald, Neal Fitzgerald & Nikki Gates, Jordan Hurl, and Timothy Hurl. He also leaves behind six great grandchildren, Lyla, Kylie, Deacon, Bryn, Eva, and Ivy. Ted was predeceased by his wife Thelma; son Chuck Hurl; daughter Laurie Patterson, and sister June Randle. Ted was born in Vulcan, Alberta, and raised in Mossleigh, Alberta by his parents Myles and Lillian Hurl. He graduated from the Southern Alberta Institute of Technology in 1949 with a diploma in Industrial Electricity and began his career as a lineman with Calgary Power (TransAlta). He retired from TransAlta after 40 years, following an incredibly successful career in which he came up through the ranks and into management. His retirement party was attended by many colleagues who had the utmost respect and admiration for his skill and work ethic. Ted’s career took him all over Alberta, including Rocky Mountain House, where one day he walked into a bank and met his eventual wife Thelma. They married in September of 1950 and celebrated 60 years of marriage before her passing in 2010. The family eventually settled in High River and Ted worked hard to make it a place he was proud of. A prominent member of the community, Ted served as fire chief, town councilor and was a long-time member of both the Rotary Club and Masonic Lodge. Often holding down the anchor spot at the grill for Rotary BBQs, Ted could also be found pebbling the curling ice in the winter and marshalling the golf course in the summer. While Ted had many interests, he was a gifted athlete and loved sports. He was an avid curler and golfer and played goal for hockey teams across southern Alberta in his youth, fondly telling his great grandchildren what it was like to be a goalie in the years before helmets. Ted thrived in retirement and would take his grandchildren on adventures every summer including fishing on his boat, the Prairie Gopher, off Vancouver Island. Ted very much enjoyed spending time with friends and family with a stiff drink and a smile. He was loved by us all. A Celebration of Ted's Life will be held at a later date. Caring for the family is Lyle Reeves Funerals of High River (Craig Snodgrass) 403.652.4242.

The family of Mr. Edward "Ted" Hurl created this Life Tributes page to make it easy to share your memories.