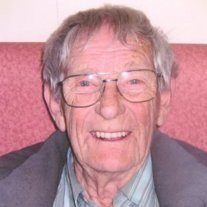 It is with great sadness that we announce the passing of Ejner Hansen. Due to health issues Ejner has been residing on 2nd Floor at the High River Hospital for the past few years, where he passed away on May 29, 2013. Ejner was born on May 1, 1924 in Boltinge, Fyn, Denmark to bricklayer Thomas Marinus Hansen and Kristine Jensen Hansen. Ejner was part of a large family of nine siblings. He grew up in his home town of Boltinge where one of his passions was soccer and the other fishing. Living close to the ocean, he proudly stated that he could catch enough fish to feed the whole family. Ejner finished school at grade seven and worked on several farms until the time came when he had to serve his one year in the Danish army. After his time in the army he decided to take the big step and cross the ocean to Canada. At this time he also worked on several farms. At one time Ejner lived in Vancouver, where he became a Canadian citizen on April 21, 1958. In the summer of 1961, Ejner went on the trip of his lifetime. He purchased a second hand 250cc Norton motorbike and drove ‘clear’ across Canada, to Halifax, where he embarked on a ship to England, drove across England, then caught the ferry to Esbjerg, Denmark. From there he drove to his hometown and surprised his family. That fall, he started his apprenticeship as an engineer – fitter, and after successfully achieving his journeyman ticket the 1st of February 1964, he returned to Canada, where he lived a number of years in Calgary and worked as a BTJ steamfitter, joining the local 496 United Association of Plumbing and Pipe Fitting. On February 3, 2010 he proudly received his 45th year membership certificate. Later he purchased his ‘pride and joy’, a small house in the west end of High River with a large garden where he enjoyed growing his specialty potatoes and various other fruits and vegetables. Some of Ejner’s passions were playing a game of crib or pool, and he always enjoyed a good joke. Most of all he liked a good laugh. If you asked Ejner how he was doing the answer was always “so far, so good”! One of Ejner’s favorite pastimes was taking a drive in the country where occasionally stopped in Mossleigh for a beer. But his favorite drive was through the mountains where he would often stop and enjoy mother nature. On one occasion when asked, “Ejner would you like to come along on a trip to Denmark?”, he replied “Yes, but only if I can smoke on the plane”. Ejner, needless to say, stayed in Canada. Ejner felt very pleased and privileged to be able to show some of his family around when they were visiting from Denmark. At 73 years old, Ejner decided he needed a computer. He said there was lots he could do on there like read the Canadian and Danish newspapers. He said “It’s cheaper that way” – you note Ejner’s slang. In Ejner’s later years he enjoyed a Friday afternoon happy hour at Han’s shop, where there were no restrictions and he could enjoy a beer and a cigar ‘at the same time’. Ejner we will all miss your great sense of humor and seeing that little twinkle in your eye. So as Ejner would say “Here’s to you, and then they drank it themselves”. Ejner was predeceased by his parents, 5 brothers and 1 sister. He is survived by 2 sisters, and numerous nieces and nephews as well as great nieces and nephews, all whom live in Denmark. On behalf of friends and family, a special thank you goes to Melanie Dale, one of Ejner’s best friends, for being by his side during his last moments. Also, special thanks to the staff on the 2nd floor at the High River Hospital, for taking such good care of him the last few years. At Ejner’s request no service will be held. To send condolences and view Ejner’s Tribute Page please visit www.lylereeves.com . Arrangements entrusted to Lyle Reeves Funerals of High River (Craig Snodgrass) 403.652.4242.

It is with great sadness that we announce the passing of Ejner Hansen. Due to health issues Ejner has been residing on 2nd Floor at the High River Hospital for the past few years, where he passed away on May 29, 2013. Ejner was born on May... View Obituary & Service Information

The family of Mr. Ejner Hansen created this Life Tributes page to make it easy to share your memories.

It is with great sadness that we announce the passing of Ejner...