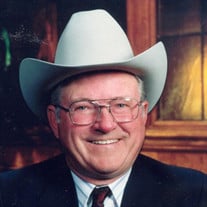 Mr. Eldon Couey of High River, Alberta passed away peacefully surrounded by his family at the Seasons Retirement Community on January 11, 2019 at the age of 88 years. Eldon will be lovingly remembered by his family: children Pat (Len) Zebedee of High River, Wally Couey of Cayley, Cathy Couey of High River; grandsons Cameron (Noelle Carrier) Couey, Cody (Tannis) Zebedee, Dawson (Katrina) Couey, and Tyler (Nalissa) Coate; great grandchildren Keston Neimans Couey, Quintyn, Slayde & Pyper Zebedee, Brody, Alexis & Deegan Couey and Michela and Mackenzie Carrier. He is survived by in-laws Peter and Ramona Pickersgill and Freddie Pringle along with many nieces and nephews, cousin Jan Schroeder of Oregon, stepsisters Denise Siemens and Daryl Hamilton and devoted friend Sharon Doll. Eldon was predeceased by his loving wife “Coddy” in 2015 on the eve of their 61st wedding anniversary; father Elbert Couey; mother Ruth (Couey) Birkness; stepfather Herb Birkness and over the years many special friends. Eldon was born at the High River Hospital and shared the nursery with his future wife Kathleen. Other than a few summers with family in Oregon he proudly called the Foothills home for his entire life. His grandparents taught the importance of giving back to his community and Eldon truly showed what it means to live a life dedicated to helping and serving others, passing those values down to his family. As a teenager, Eldon helped plant the majestic poplar trees which still align 12 Avenue, he was a member and past president of the High River Ag Society and played a role in the Little Britches Rodeo for over 40 years. He acted as president of the Chamber of Commerce, Mayor of Teen Town, Noble Grand of the Cayley Oddfellows Lodge, District Deputy Grand Master of the Grand Lodge of Alberta, chair of the Squaw Coulee Water Diversion and of the Highwood Memorial Centre and participated in numerous other boards and committees. Eldon was honoured to be twice named a Paul Harris Fellow as member of the High River Rotary Club and acted as ambassador for Alberta’s Centennial. He was one of three finalists in the Calgary Stampede’s Western Legacy Awards, and recipient of the Cayley Oddfellows 70-year jewel and the Queen’s Jubilee Medal. Couey Auction, which was started by Eldon in 1961 and continues to be operated by son Wally and family friend Dave Smith, received the Clifford and Louise Lougheed award, in recognition of outstanding philanthropy for supporting the hospital. Eldon was active in political life as member and president of the Highwood PC Association. In 1971, he ran for MLA, losing by a close margin. He was affectionately known by some as the Mayor of Squaw Coulee and from 1989 to 1998 he proudly served as Mayor of High River. Of all the hats he wore, the red one with the white fur was likely his favourite as each December the twinkle in his eye got brighter when he donned the red suit and white beard and attentively listened to the wishes of hundreds of children. Our heartfelt thanks to those who have cared for Dad; in particular, Dr. Ron Gorsche, health care professionals at the High River Hospital, and the staff at Season’s who provided wonderful care to Dad while it was his home, and to all of us on his last day. A Celebration of Eldon’s Life was held on Wednesday, January 16th at 1:00 p.m. at the Highwood Memorial Centre (128 5th Ave. SW, High River). In lieu of flowers please consider a donation in his honor to the High River District Health Care Foundation 560 – 9 Ave SW High River, AB T1V 1W4 highriverhealthfoundation.ca. Caring for the family is Lyle Reeves Funerals of High River (Craig Snodgrass) 403.652.4242.

Mr. Eldon Couey of High River, Alberta passed away peacefully surrounded by his family at the Seasons Retirement Community on January 11, 2019 at the age of 88 years. Eldon will be lovingly remembered by his family: children Pat (Len) Zebedee... View Obituary & Service Information

The family of Mr. Eldon Charles Couey created this Life Tributes page to make it easy to share your memories.