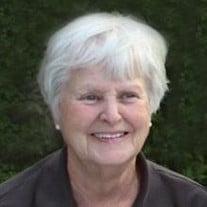 It is with great sadness that we announce the sudden passing of Eleanor Conradson on April 5, 2019 at the age of 83 years. Eleanor is survived by her daughter Karyn (Kurt) Schwartzenberger; grandchildren Ryan and Hannah; brothers Dennis McCarthy and Dick (Lee) McCarthy; and eight nieces and nephews. She is predeceased by Lloyd Conradson, sister Marilyn Dewdney and her parents James and Mable McCarthy. Eleanor was born in Moose Jaw, Saskatchewan on January 7, 1936, where she spent her early years growing up on the family farm. The family eventually moved to town, and she graduated from Central Collegiate high school. A talented singer, she studied voice at the Royal Conservatory and attended the Qu’Appelle Diocesian School in Regina. She earned her RN degree in 1959 from the Holy Cross Hospital in Calgary. After completing her nursing diploma, her independent and adventurous nature took hold. She left her home province and found work as a nurse in Whitehorse, YT and Penticton, BC. It was also at this stage of her life that she decided to learn how to fly, and she became one of the first women at the time to acquire her small airplane pilot’s license. In later years, she was the site nurse at the Old Man River Dam, and also on the Siksika Nation Reserve. All of these accomplishments are a testament to her confidence, determination, intellect, and work ethic. Throughout her entire life, she was surrounded by close friends – undoubtedly as a result of her outgoing, fun-loving, and protective nature. As a long-time resident of High River, AB, she seemed to know everyone in town, and everyone knew her. Her involvement and volunteer work in the community include the following: the High River Swim Club and Figure Skating Club; St. Benedicts Church, leading the Junior Choir; offering her expertise as a singing teacher; and the PC Political Party. By far, however, Eleanor’s biggest joy was her family. Her daughter Karyn, and later her grandchildren, were the light of her life and she spent every moment she could with them. She will be greatly missed as a loving and compassionate mother, grandmother, sister and friend. She was a beautiful soul who would go out of her way to help others. Her sense of humour and infectious laugh will always be remembered. A Celebration of Life will be held on Saturday, May 18th, at 2:00 pm at St. Benedict’s Anglican Church, 602 – 3rd Street W., High River, AB. Reception to follow at the Highwood Golf & Country Club (400 - 7th Street NW). Please bring your favourite stories and memories of Eleanor: the family welcomes you to share them at the Reception. Caring for the family is Lyle Reeves Funerals of High River (Craig Snodgrass) 403.652.4242.

It is with great sadness that we announce the sudden passing of Eleanor Conradson on April 5, 2019 at the age of 83 years. Eleanor is survived by her daughter Karyn (Kurt) Schwartzenberger; grandchildren Ryan and Hannah; brothers Dennis McCarthy... View Obituary & Service Information

The family of Mrs. Eleanor Kathleen Conradson created this Life Tributes page to make it easy to share your memories.

It is with great sadness that we announce the sudden passing...