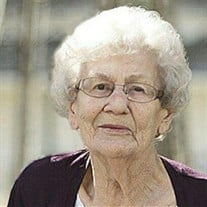 Mrs. Freda Dykstra of High River passed away surrounded by family and went to be with the Lord on February 2nd, 2017. Freda was born July 20, 1924 in Oudehaske Friesland, the Netherlands to Berend and Aaltjie Berger. Freda was third of four children. When Freda was three years old her family came to Canada. They lived in Edam, Saskatchewan for almost eight years. After a few years of poor harvest she along with her family moved to a farm by Winterburn, Alberta just west of Edmonton. While working at Woodwards department store, Freda completed evening course at the McTavish Business College and went to work for the Canadian Fairbanks Morse company for several years. Freda met Ray the love of her life at a church youth group outing in Edmonton. They were members of the first Christian Reformed Church and were married on April 17, 1953. They were blessed with four sons. Donald born in 1954, Barry in 1957, Glenn in 1961, and Robert in 1963. Ray and Freda Dykstra along with their son Glenn moved to High River in May of 1980. The Dykstra's attended the High River Christian Reformed Church. Freda was very involved in the ministries of the church, teaching Sunday School, taking part in Vacation Bible School, Coffee Break ladies ministry and also the Lydias ladies fellowship. Freda was involved in various outreach groups. The Mennonite Prison Ministry, visiting the Drumheller Correctional Centre once a month. Freda was also involved in the ministry of the Gideon International and was a member of the ladies’ auxiliary, and was an active member of The High River Pro Life. Freda was an inspiration to many, Freda was always grateful for the worship services, fellowship and the outreach that the High River CRC provided and she wants all to remember that in all things "The Lord is coming". Freda is predeceased by her two brothers Tim Berger and John Berger and by her husband Raymond Dykstra and daughter-in-law Daria Maluta. Freda is survived by her children Donald, Barry (and his son Blake), Glenn (Mary) and their children Kimberly (Hollis) Jacobsen (and their children Halle, Owen and Lacey), Mark (Jayna) Dykstra (and their children Landon and Brooklynn), Laura Dykstra, Tracy (Grayson) Meaden and Rob Dykstra; brother Joe (Jean) Berger; sister-in-laws Minnie Berger and Winnie Berger as well as numerous nieces and nephews. A Memorial Service was held on Wednesday, February 8th at the High River Christian Reformed Church (450 Macleod Trail). If desired memorial donations may be made to the Foothills Gideon's Camp. To send condolences and view Freda’s Tribute Page please visit www.lylereeves.com . Caring for the family is Lyle Reeves Funerals of High River (403.652.4242).

Mrs. Freda Dykstra of High River passed away surrounded by family and went to be with the Lord on February 2nd, 2017. Freda was born July 20, 1924 in Oudehaske Friesland, the Netherlands to Berend and Aaltjie Berger. Freda was third of four... View Obituary & Service Information

The family of Mrs. Freda Gertrude Dykstra created this Life Tributes page to make it easy to share your memories.