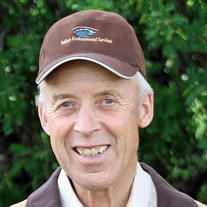 Mr. Fred Gould of Nanton, Alberta passed away peacefully on July 2, 2018 at the Chinook Hospice in Calgary at the age of 73 years. Fred is survived by his wife of 44 years, Karen; daughter Shawna (Jason) Gould of Nanton and granddaughter Taryn Tompkins, daughter Sharon (Kelvin) Klinger and grandchildren Karsen and Jesse of Saskatoon, SK, “bonus” daughter Sandi Riemersma (Scott Stoklosar) and grandchildren Elijah and Jack of Mossleigh, AB; sister Joyce Sottile (Paul) of Pass Lake, ON and daughter Dayna and family; brother Bruce (Paula) Gould of Sooke, BC and daughters Mecea (Bruno) and Holly (Kevin) and families; brother Len (Nancy) Gould of Mississauga, ON and daughter Christine (Keith) De Bruin and son Frank Gould (Susan) and families. Fred was predeceased by his parents Frank and Ruth Gould, mother-in-law Antonia Neilson, nephew Daniel Sottile and cousin Joan Rutherford. Fred was born in Dryden, ON and grew up on a mixed farm 6 miles out of Dryden. He was the oldest boy in a family of 4, and he grew up working hard. He was very quiet and good in school, and was active in the Junior Farmer’s (Ag Society) and 4-H. After he graduated from high school, he helped his father with a logging/skidding operation and worked at the Dryden Paper Mill. He also worked at a fishing camp, where he cleaned fish and guided during summers. As a boy, he always wanted to have a ranch. In 1970, he moved to Nanton to farm with his uncle. He met his wife, Karen, through his cousin Joan (Gordon) Rutherford, and together they shared many laughs through the years. In 1979, he bought a ranch and moved to the Porcupine Hills west of Stavely and realized his dream of having a ranch. He started a feedlot in 1987 (Chinook Feeders) and continued his tradition of perseverance. He loved taking care of his cattle; when he retired from the feedlot, they were a source of much enjoyment and kept him very busy. He believed in hard work and helping everyone around him, and it showed in all that he did. He was active in the community through the Nanton Promoters, Nanton Lions Club and Stavely Elks, and was always ready to help anyone in need. A Memorial Service will be held on Monday, July 23rd at 2:00 p.m. at the Nanton Community Centre in Nanton, Alberta. Special thanks to the Chinook Hospice, Brenda St. Louis, Kerstin Gilstorf-Hickey, Laura Ward and Doug Nelson. In lieu of flowers, donations can be made to the ALS Society of AB, 7874 10 St NE, Calgary AB, T2E 8W1, www.alsab.ca. To send condolences and view Fred’s Tribute Page please visit www.lylereeves.com . Caring for the family is Lyle Reeves Funerals of High River (Craig Snodgrass) 403.652.4242.

Mr. Fred Gould of Nanton, Alberta passed away peacefully on July 2, 2018 at the Chinook Hospice in Calgary at the age of 73 years. Fred is survived by his wife of 44 years, Karen; daughter Shawna (Jason) Gould of Nanton and granddaughter Taryn... View Obituary & Service Information

The family of Mr. Frederick Robert Gould created this Life Tributes page to make it easy to share your memories.