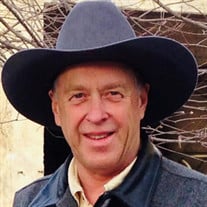 Fred Taylor of High River passed away on December 25, 2021, at the age of 69 years. Fred is survived by his loving wife of 42 years, Connie Taylor; son Zac Taylor (Courtney Taylor); daughter Darby Allen (Dan Allen); grandchildren Lexi and Austin Allen; sister-in-law Donnie Taylor Aasen; nephew Carey Taylor; nieces Shelley Taylor and Karlene Benallick (Mike Benallick) and their children Carter, Jenna, Cole Benallick. Fred was predeceased by his brother Royden Taylor and by his parents Walter and Kathleen Taylor. Fred was born in Gainsborough, Saskatchewan on December, 10, 1952. Fred spent his early years in the farming community of Pierson, Manitoba. He was raised in a strong Christian home and was taught from an early age to be a prayer warrior by his mother, Kathleen Taylor. He continued to grow to be a well-respected man of God who often quoted Philippians 4:13 “I can do all things through Christ who strengthens me” to anyone who was in need of love and encouragement. Fred spent his early years farming with his father, Walter Taylor. Fred attended the local 4-H beef club where he became rooted in the community and the principles of 4-H. He accredited his success in the beef industry to the fundamental skills he gained during this time. Fred played junior hockey in Dauphin, Manitoba, and later scouted for the Moose Jaw Warriors. His love of hockey continued throughout his life and led to many friendships within the hockey community. In 1977 Fred took a position with Agriculture Canada as a meat inspector in Winnipeg Manitoba. Here he met the love of his life, Connie, on the harvest floor at Burns Meats, where she worked as a veterinarian for Agriculture Canada. Fred and Connie were married and had their two children, Zac and Darby, while living and working on the farm in Pierson. As a family they moved across the Prairie Provinces living first in Moose jaw, SK and then residing in High River, AB. Fred spent the rest of his career as a beef grader for the Canadian Beef Grading Agency. Fred founded Taylor Made Research, where he processed research cattle for several cattle associations and university researchers. Fred was well known and respected in the beef industry. He spoke often to consumers, producers, packers and retailers educating them about the importance of beef grading and promotion. Fred also wore many hats in the agriculture community. He judged 4-H shows across Canada, was a committee chair and judge with the Calgary Stampede, had close ties to the Angus Association, raised pure bred Angus cattle and became well known for his cooking, especially his smoked ribeye beef. Fred would always say “You can never know too many people,” and this statement was evident in how he lived out all aspects of life. Fred was larger than life. He was so proud of his family, the lives they lived, and most importantly that they had a personal relationship with the Lord. Fred made time for everyone. We will miss him dearly, but Heaven gained an incredible man, and we know we will see him again. If desired, memorial donations may be made to Heaven Can Wait Animal Rescue - www.heavencanwait.ca A private family service will be held. Caring for the family is Lyle Reeves Funerals of High River (Craig Snodgrass) 403.652.4242.

The family of Mr. Fredrick Wayne Taylor created this Life Tributes page to make it easy to share your memories.