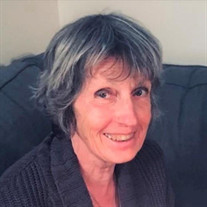 Gayelle Ruth Geres of High River, Alberta passed away peacefully on May 9th, 2021 in Calgary, Alberta, Canada at the age of 75 years. Gayelle was born on December 10, 1945 in Earl Grey, Saskatchewan to Doris and Ernie Foster. The farm is where she spent her early years until she finished high school at Bryn Mawr School. It was here that she met the love of her life, Wally. They were married in July 1966. She worked as a medical receptionist in Regina, and then she and Wally decided to head west to Alberta where he would take a teaching job in Rocky Mountain House. After one year, they moved and settled in High River to start and raise their family. Jason was born in April 1970, followed by Tyson in 1973 and Christy in 1975. Gayelle was a stay-at-home mom, teaching her kids about gardening and music and how to be kind to animals and people. After seeing her three children off to school, Gayelle returned to the work force in 1981 to work at Winds Casual Wear. She caught the retail bug and moved to Petticoat Lane, which she managed and later owned. She enjoyed her time visiting and catching up with friends, new and old. Gayelle was passionate about the Town of High River. She was all about ‘shopping local’ and spent countless hours on the board of the Chamber of Commerce planning events for the town, Little Beaches Day was one of her favourites! She was a Beaver leader for the Boy Scouts and was an active member of the Lutheran Church. She generously gave where she could, to help others in need and was regarded as a kind, loyal and encouraging friend. She always looked on the bright side and was ready for a hug anytime. She was a sports girl at heart, you could always find her cheering on the Calgary Flames, Saskatchewan Roughriders or Toronto Blue Jays. Grandma would always make time for her grandchildren, always supportive and loving, hoping to do a craft or plant some flowers with them. There wasn’t a time that there wasn’t a kitty in the house, whether a stray or her own, she loved them all! Gayelle enjoyed travelling, whether it was back to Saskatchewan to check on the crops and to see family or around the world to Australia, a trip she made numerous times. She treasured her time with all her family and friends. Gayelle was dearly loved and will be missed by her sons Jason (Kylie) and Tyson and her daughter Christy (Trent), as well as her grandchildren Delaney, Stella, Kinley and Clayton. She is survived by her sister Gloria (Stu) Clifford; Brother-in-Law Archie Macdonald; Sister-in-Law Myrna Foster; as well as numerous cousins, nephews, nieces and close friends. Gayelle was predeceased by her husband Albert Walter Geres, grandson Carter Gray, sister Doreen MacDonald, brother Donald Foster and her mother and father, Doris and Ernie Foster. Memorial Donations can be made to Heaven Can Wait. A Celebration of Gayelle’s life will be held at a later date and time. Caring for the family is Lyle Reeves Funerals of High River (Craig Snodgrass) 403.652.4242.

Gayelle Ruth Geres of High River, Alberta passed away peacefully on May 9th, 2021 in Calgary, Alberta, Canada at the age of 75 years. Gayelle was born on December 10, 1945 in Earl Grey, Saskatchewan to Doris and Ernie Foster. The farm is where... View Obituary & Service Information

The family of Mrs. Gayelle Ruth Geres created this Life Tributes page to make it easy to share your memories.