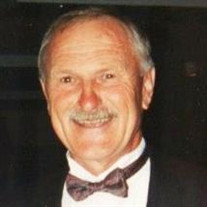 George Karch of Calgary, AB passed away on October 25, 2019 at the Peter Lougheed Hospital at the age of 84. George is survived by his wife Noreen; daughters Karla Karch (Brian Armitstead), and Kendra Karch-Sinclair; favorite son, Maury Karch (Leona Esau); grandchildren Dallas, and Payton (Rebekah). A Celebration of Life will take place at a later date. George was predeceased by his parents, Ben and Emelie Karch, sister Helen Kozak and son-in-law Bob Sinclair. George was born in Calgary, Alberta to Ben and Emelie Karch who emigrated from Czechoslovakia in 1929. Geo lived and attended primary school in the Bridgeland area of Calgary. As a child, he was very active in a variety of sports, including hockey, basketball and skiing. After graduating from Western Canada High School, Geo attended SAIT where he received a surveying and drafting diploma. In 1955, he started his career with Shell. For the next 31 years, work allowed Geo to see all parts of Canada, mostly working with seismic, as well as off shore surveying. During Geo’s work with Shell he was stationed in southern Saskatchewan and in 1956 he caught the eye of a young nurse at a house party in Weyburn. This young nurse, along with her many sisters, would cruise the streets of Weyburn in their dad’s Chevy checking out the boys. Obviously, Geo was smitten with this young lady, Noreen, as he proceeded to follow her to California for a visit while she was working there as a nurse. After he proposed to Noreen they returned to Weyburn where they were married. Soon after, work allowed them to relocate to Calgary. In 1961, Geo and Nor welcomed their first child, Maury (Moe). Not long after, they transferred to Edmonton where their second child, Kendra, entered the world. Another move for Geo had the family living in Vancouver where their third child, Karla, came along. Upon returning to Edmonton in 1969, Geo and Nor bought lake front property at Pigeon Lake where they actively participated in many activities throughout their fifty years of enjoyment. Geo’s favorite sports were golfing and water skiing. Throughout the seventies, Geo competed at local, provincial, and international water skiing competitions. Many cabin owners would remember seeing his ski jump and slalom course along with the Up-Two ski boat. Golfing became a bigger focus throughout the eighties and he continued with this love through to 2015. Throughout Geo’s life he was a hobbyist. He loved to fix up the Datsun’s for use by himself or his children. We still don’t know the complete story of how he fixed one of the troublesome cars that supposedly was an “easy fix”. Geo took that one to the grave. He enjoyed putzing around any garage, pick-a-part, Kendra's acreage, always looking to fix or repair something. George will be remembered for his sense of humour, his “Geoism” such as “it’s just a question”, “don’t get me wrong”, “why is everyone so serious”, “skill and high IQ”, and “I didn’t feel a thing”. Family meant everything to Geo. Earlier this summer Noreen and George celebrated their 60th Anniversary and in early September he had the pleasure of seeing his eldest grandson get married. Geo will be forever missed and much loved! Caring for the family is Lyle Reeves Funerals of High River (Craig Snodgrass) 403.652.4242.

The family of Mr. George Karch created this Life Tributes page to make it easy to share your memories.