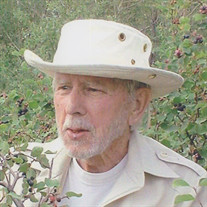 “A century well spent” It is with great sadness the family of George Frederick Maynard, formerly of Calgary announces his passing on December 26, 2016 at the High River Hospital only 8 weeks from his 100th Birthday. Born Feb 16, 1917 in Maryfield Saskatchewan to John Alfred Maynard and Mary Magdelaine Simon, he was the second youngest and pre-deceased by nine siblings (Lorne, Gertrude, Harriet, Roy, Hazel, Marion, Earl, Arthur, and Dorothy). He was a loving husband to Edith Bernice (Ramseth) Maynard (deceased) and father to James Douglas Maynard (deceased) (Lynda) , George Barry Maynard (Laureen), and John Craig Maynard (Neva). George also had 5 Grandsons: Liam (mother Roberta), Jason and Alex (mother Laureen), Cole and Cody (mother Delorane ), and three Great-grandchildren: Payton, Brynley, and Adalyn. George had an amazingly sharp mind, right to his last day and was always an early adopter and tinkerer. In his final days he learned to read e-books and talk to loved ones using FaceTime! He had a spirit to him that anyone he met grew to love, and could give you a wry smile and a twinkle in his eye that was always endearing. He loved golf, travel, puzzles, reading and was a gifted pianist: a talent that caught the eye of his soon-to-be loving wife, Edie, as he performed on-stage at a dance at Ma-me-0 Beach near Edmonton. He was a highly respected landman spending most of his life working for Mobil Oil and Dome Petroleum and was always the go-to expert on anything concerning complicated land contracts. Most of all, George never complained or tried to draw attention to burdens he carried, and he had quite a few… he was involved in an awful pedestrian accident over 20 years ago which led to a long string of physical ailments that stripped him of the ability to enjoy his favorite pastimes and put him in a wheelchair for much of the remainder of his life. Everyone knew of his discomfort but he would never draw attention to it as he developed new interests and hobbies. He would always be an amazing companion and left you wanting to visit him more. George was very competitive, and always found a way to win at any activity he participated in, and that twinkle would re-appear with each win to soften our frequent defeats. He loved playing cribbage with his sons and daughter-in-law every day before he crossed over, teasing them for a re-match. All of George’s family love him dearly and are comforted by a long life well lived, and a century of memories. George and Edie’s memorial service was held on Monday, Jan 2, 2017 at the Highwood Memorial Centre (Heritage Veterans Room) 128-5th Avenue SW in High River.

&#8220;A century well spent&#8221; It is with great sadness the family of George Frederick Maynard, formerly of Calgary announces his passing on December 26, 2016 at the High River Hospital only 8 weeks from his 100th Birthday. Born Feb 16,... View Obituary & Service Information

The family of Mr. George Frederick Maynard created this Life Tributes page to make it easy to share your memories.

It is with great sadness the family of...